Home / Incident / Near Kiev detained the robber with a grenade

Near Kiev detained the robber with a grenade 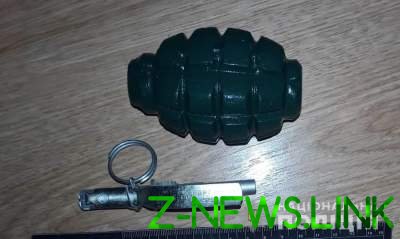 The man admitted to police that his neighbor illegally storing the weapon and ammunition.

In the village Baryshevka of Kiev region the person is in a state of alcoholic intoxication went to the store, put the grenade on the counter and threatened to blow it up. Then he took ammunition with him and went away.

Police baryshevsky police detained the offender’s place of residence. He was a 49-year-old local resident. When conducting an emergency search, the police seized his body a grenade “f-1” of times of the great Patriotic War and sunk her. He admitted to police that he found ammunition and a metal detector was kept as a war souvenir. It is reported by the Department of communication of the police of Kiev region.

On this fact initiated criminal proceedings under part 4 of article 296 (hooliganism) of the Criminal code of Ukraine.

At the scene worked experts-bomb experts of the Main Directorate of police of Kiev region, investigative team of the local police.
Militiamen carried out an urgent search at the residence of 61-year-old owner.

There, in the pantry, was discovered and seized various items and ammunition from the weapons of the great Patriotic War: parts of a rifle “Mosina”, gun “KI”, 45 mm shell casing from the gun, 47 rounds of ammunition of various caliber. As the owner explained, this military archive year ago gave you to keep it familiar.

Seized evidence is directed in ekspertno-the criminalistic center. On the fact of illegal handling of weapons the criminal proceedings.