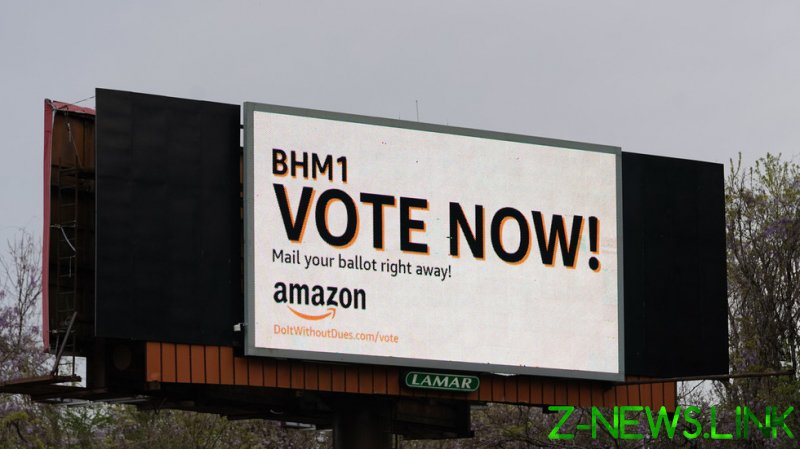 The business lobby deployed a set of ads, presented in the form of an interview, with almost identical scripts across NBC and ABC affiliates in several states, warning viewers that passing the PRO Act “could impact every American family and American community” with barely a peep uttered from the working people those presumably dastardly unions hoped to prey on.

Pro-union outlet More Perfect Union dug into what exactly the campaign was and who was directing it, discovering the Chamber of Commerce had been very busy beefing up anti-union sentiment in Arizona, Georgia and Virginia.

If it passes, the PRO Act would be the first US law expanding worker protection since 1935, not only making it easier for employees to unionize but giving them more legal powers to do so as well. Fully titled the Protecting the Right to Organize Act, the legislation will be voted on before President’s Day – nearly a year in the future, indicating how important its failure is for the Chamber.

“Under the PRO Act, union leaders could come to your house and force you to sign a card right there and then,” Chamber President Suzanne Clark warned, conjuring up figures of unionized workers turned secret police laying siege to innocent American families.

Extensive writeups condemning the legislation by the Chamber of Commerce and its allies describe the the PRO Act as a “sweeping rewrite of US labor law,” in which those not already working for a union would be forced to join such a group “by taking away the right to a secret ballot,” according to an ominous-sounding press release on the lobbying group’s website.

Indeed, the lobby suggested, the whole setup was designed to intimidate those who did not want to unionize into revealing their anti-union status for… reasons unknown.

Some of the commercials were truly over the top in terms of propaganda. Arizona ABC affiliate KGUN9 spit up a mere four-second chyron for the whole segment, reminding the audience that they were watching a scenario filmed by paid lobbyists, following the stilted conversation with gotcha questions like “What can people watching do to help stop this legislation that will hurt local workers?” Referencing the demise of secret ballots, the Chamber hinted union bosses would remember who’d voted against the union and hold it over employees at a later date.

The ads also hinted that the American worker was not savvy enough to figure out what the bill meant on their own, though stopped short of saying so, instead begging Americans not to strain their brains and let the Chamber translate the text of bills. Further pressed about it by More Perfect Union, however, KGUN’s general manager dodged the question of whether he would “willingly air factual inaccuracies.”

“Too few people have been able to understand” the pivotal piece of legislation in question, the official pointed out.

But the Chamber of Commerce was unfazed by the union publication’s pushback. Regarding NBC affiliate WXIA in Atlanta, Chamber execs acknowledged that while there was no overt indicator that the audience was watching an ad, the programming block in which it aired was a known “pay to play” morning segment called “The Morning Blend,” in which advertisers got coveted access to Americans getting ready for – or setting out on – their morning commute.

If people understood what was in this bill, Clark warned, “they’d be up in arms calling their senators.”

More than a few Americans watching the segment had flashbacks to the infamous Sinclair Broadcasting clip that aired across that company’s holdings in 2018 excoriating “fake news.”

How America's largest local TV owner turned its news anchors into soldiers in Trump's war on the media: https://t.co/iLVtKRQycL pic.twitter.com/dMdSGellH3

The US Chamber of Commerce is the largest lobbying organization in America, representing businesses and using its heavy weight and influence in the halls of Congress to get results.