Home / sports / NBA: Philadelphia went ahead in the series with Toronto

NBA: Philadelphia went ahead in the series with Toronto 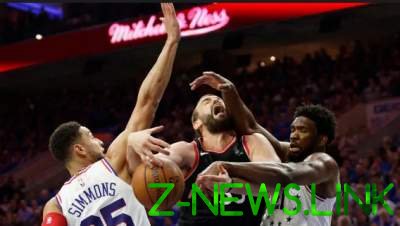 Philadelphia took the lead in the series with Toronto, breaking the Canadians in the third match on their home court. The basis of the success of the Sixers was the dominance of the starting five over Cavem Leonard and company.

The hosts to the break and amassed a double-digit advantage. In the third quarter Toronto was able to equalize the game, but all hopes of the raptors for a comeback were dashed after conceding a jerk 21:2. Detachment Philadelphia reached 26 points – the final minutes of the match became a formality.

In the third match of the series with Toronto the highest level of efficiency demonstrated Embiid Joel and Jimmy Butler, who added 55 points 8 protective actions (5 block shots from the Cameroonian and 3 steals from American). “Toronto” is clearly not enough support from Kyle Lowry and
Marc Gasol, who together scored only 14 points and ended the match with a total figure utility “-54”.

The fourth match of the series between Toronto and Philadelphia will be held may 8 in the first capital of the United States.