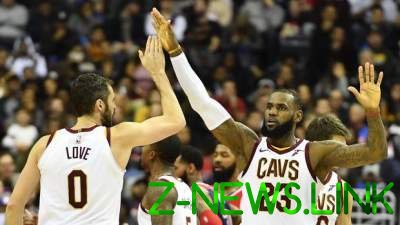 The next game day of the regular NBA championship consisted of four games.

LeBron James scored the third triple-double in a row, and “Cleveland” on the road upset Washington and extended its winning streak to five games. The most effective from the Cavaliers was Kevin Love (25+9 rebounds), and reservists have added another 40 points.

“Toronto” on the home arena beat the Sacramento and became the third team East, who won in the regular season of 20 wins. Canadians suddenly lost the first half but after the break put the squeeze on the outsider of the West.

“Detroit” after a disastrous series returned to winning ways. “Pistons” in a match with “Orlando” hardly has not missed a 24-point advantage, allowing “magic” in the end of the match to reduce the gap to four points.

“Indiana” on the road confidently figured out “Brooklyn” and cemented their place in the top five of the Eastern conference. Another powerful match from Victor Oladipo off the bench supported Domantas Sabonis and Cory Joseph, scored two on 32 points.