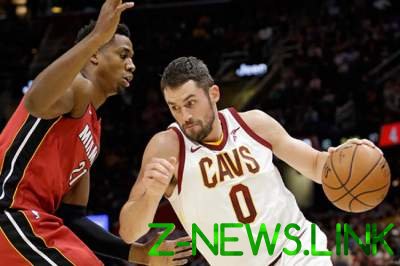 The next day the regular championship of NBA.

“Cleveland” without special problems has understood with “Miami” and extended their winning streak to nine matches. “Cavaliers” to the break and scored 75 points, and then switched to economy mode and allowed the “Heath” to reduce the gap to 11 points. Kevin Love 6 minutes of the first quarter scored 19 points, updating personal record of rate of fire. Not to mention the productivity of reservists Miami – Dwyane Wade and Kyle Korver for two, shipped in the basket Miami by 39 points.

Washington, despite the absence of John wall, away unexpectedly beat Minnesota. Guests from the U.S. capital after a long break played 8-point gap, and the main architect of the victory was Otto porter, who at the end of the match when the score was 87:89 scored four points in a row.

Alex Lane recently fell out of the rotation “Phoenix”. The Ukrainian has publicly expressed disappointment with the lack of playing time and then got the chance to prove himself. In the away match against “Chicago” Lang played nearly 30 minutes, scored 13 points (6 of 10 games, 1 of 2 from the free throw line) and collected 18 rebounds.

Another representative of Ukraine in the NBA Joel Bolombi played four minutes in the closing stages of the match against “Sacramento”. A native of Donetsk converted one penalty and had one selection.