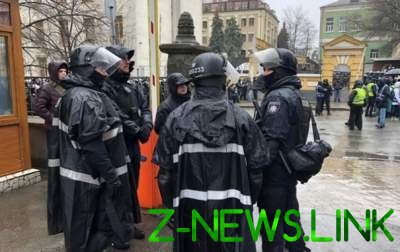 Clashes with police have been.

Ncorpus held its latest protest. She finished near the presidential Administration. There the nationalists the music threw militiamen plush pigs. Some of them, they ran through two-meter slingshot.

According to police, all in stock have taken part about 2 thousand people, although Ncorpus announced that will come to 10 thousand of their members and supporters.

See also:  Escape the APE of the American zoo captured on camera. Video

The protests were held under the slogan to send to jail the former first Deputy of the NSDC Secretary Oleg Gladkovsky and his son Igor.

Clashes with police have been.