Home / WORLD / NATO’s bullish new plan to fight Russia on the seas, the skies & in space could backfire, igniting a catastrophic nuclear conflict 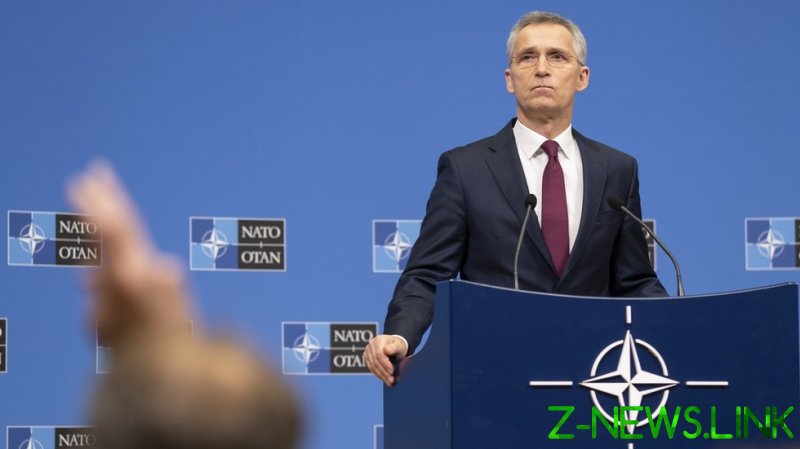 As you would expect, NATO insists that this cross-continental strategy will serve only defensive purposes and the US-led group has also emphasized that it does not believe that Russian attacks are imminent. In other words, NATO presents this initiative as an act of due diligence: preparing for the worst imaginable scenario, while helping to avoid it ever becoming a reality by deterrence, as German Minister of Defense Annegret Kramp-Karrenbauer has duly underlined.

When it comes to why the measures are necessary, NATO, of course, blames Russia. Specifically, it claims Moscow has a recent record of militarily challenging the status quo in Georgia and Ukraine and probing the bloc’s capabilities in the Baltic and Black Sea areas. Moreover, this story goes, Russia has generally beefed up its military capabilities and the entire continent should apparently be worried.

Moscow, of course, sees things differently. In the Kremlin’s view, it is NATO that is encroaching on its security in its immediate neighborhood, especially by expanding its activities in Ukraine and offering the latter full membership, in principle if not – yet – in reality.

Russian Deputy Foreign Minister Alexander Grushko has warned that what he describes as NATO turning “the Black Sea into an arena of military confrontation” is “an extremely dangerous path fraught with the risk of military incidents and escalation.”

Russian Minister of Defense Sergey Shoigu has been even more outspoken. Directly referring to Kramp-Karrenbauer’s comments, he has accused NATO of refusing to have an equal dialogue on security questions and instead using the pretext of deterrence to concentrate forces close to Russia’s borders, in – he clearly implies – a manner that goes beyond deterrence and defense, signaling potential aggression.

Pointedly, he added what sounded like a reference to Germany’s overreach and defeat in World War II, saying Kramp-Karrenbauer should remember “how things ended up” in the past.

Russian President Vladimir Putin has also highlighted that the issue is causing concern, if in an indirect manner, by reiterating that his country is opposed not only to NATO membership for Ukraine, but also to the bloc spreading its infrastructure in the country. This is not a new position, but the reminder at this point clearly has to do with NATO’s Black Sea plans.

It would be easy to add more examples of how sour the mood is all around, such as the recent cutting of formal diplomatic ties between Russia and NATO or the public statement by the latter’s Secretary-General Jens Stoltenberg that the relationship is at a post-Cold War “low point.”

No wonder, one is tempted to say, when Stoltenberg cannot think of a better response to Russia’s geopolitically quite ordinary concerns than dismissing them out of hand as simply unfounded. “Just trust us, we mean no harm!” is a rather daft statement between states and blocs, especially when the relationship, as Stoltenberg admits, is already abysmal.

But we need to go beyond official announcements and the war of words. NATO’s explanation for its new Baltic and Black Sea initiative is self-serving, as you would expect in politics. More importantly, it is also likely to be very incomplete. Publicly, the bloc presents its step as a response to Russia’s actions. While these certainly play a role, an important part of reality gets lost that way. The new plan also seems to reflect attempts to settle debates and resolve tensions within NATO.

The relevant disagreements cluster around three issues. First, most obviously, there has been a longstanding issue about how to balance NATO forces between the Baltic and the Black Sea; second, there seems to be a link to the ongoing struggle over the question of European “strategic autonomy,” that is a certain degree of at least potential independence from the USA. And third, the recently escalating attempts to turn NATO into a tool of Washington’s new Cold War against China probably also matter.

The details are, as always, complex, but the essence of the difference is simple. The core of the system in the Baltic region comprises four rotating battlegroups that, in effect, are meant to serve as a tripwire deterrent. The theory is that they are small enough not to threaten Russia – and thus provoke more tension or open conflict – but big and multinational enough to signal that any attack in the area would encounter a full NATO response.

The so-called “tailored Forward Presence” in the Black Sea region is more complicated and, up until now, somewhat more diffuse. Its key elements are a headquarters in Romania and various land, air, and sea activities that sometimes clash with Russia’s claims in the same region, in particular regarding Crimea.

With respect to the new NATO approach just announced, the point to note is that there have been repeated calls to, in essence, upgrade the status of the Black Sea “Forward Presence.” Inevitably, such discussions have produced anxieties as well: If NATO puts more into the Black Sea region, will the Baltic suffer any losses? In this context, the new strategy signals two things: the Black Sea region gets its upgrade, and the Baltic won’t be worse off for it.

Concerning the question of “strategic autonomy,” it is intriguing that Kramp-Karrenbauer has chosen to use her few remaining days in office not only to emphasize the truism that, ultimately, NATO’s credibility depends on its ability to use military force, but also to state a much more contentious position. In an interview with Politico, she reiterated her well-known insistence that any European capabilities must remain attached firmly to both NATO and the USA.

It takes little imagination to connect the dots between her two public interventions. In that perspective, the new NATO plans for the Baltic and Black Sea serve to demonstrate that NATO is not only there to stay, but looking for new fields of expanded activity.

And that brings us to the third and widest context of the new Baltic-Black Sea strategy. This is the current American attempt, likely to succeed, to push Washington’s NATO allies – against their national interests – into joining a misconceived Cold War against China, regardless of whether it is officially declared or denied. The real issue is probably not so much that the West is construing far-flung analogies between China’s claims in the South China Sea and Russia in the Black Sea.

Rather, a look at NATO Secretary-General Stoltenberg is instructive again. Enthusiastic about selling the new focus on China, he has also been eager to give the impression that it can be reconciled with European NATO partners’ concern with Russia.

More than that, he has implied that either they go along with the USA on China or the USA might leave them hanging regarding Russia. If that is the whip, then one of the uses of the new NATO initiative in the Baltic and Black Sea is to wave a bit of carrot, especially since it comes with financial sweeteners in the billion range. Here, the message goes, not only are we not weakening our commitment in the Baltic region to beef up the Black Sea area, we can also stay expansive in Europe, even while shifting to China as well.

In sum, there are good reasons to suspect that the new NATO approach to the Baltic and especially Black Sea region owes at least as much to the internal politics of NATO than to its assessment of Russia and its intentions. But that’s no reason to feel reassured, rather the opposite, in two respects. First, if NATO had a memory, then it would recall that such a privileging of internal compromise was what went so terribly wrong at the Bucharest summit of 2008, when the bloc papered over a deep rift by vaguely promising membership to Ukraine and Georgia, creating the ambiguity that misled the latter into believing it could fight Russia, with devastating consequences.

Second, there is a key difference between the Baltic and the Black Sea regions that the new approach seems to either miss or deliberately mishandle. The Baltic does not contain a Ukraine, i.e. a large, strategically important state that is not a bloc member but is a recipient of massive NATO – and generally Western – support and seeks to join the club (based, again, on the misguided promises of Bucharest 2008) while at odds with Russia.

For that reason, and many others, the latest plan is more likely to dangerously accelerate tensions than cool them down. The timing, it seems, could hardly be worse.