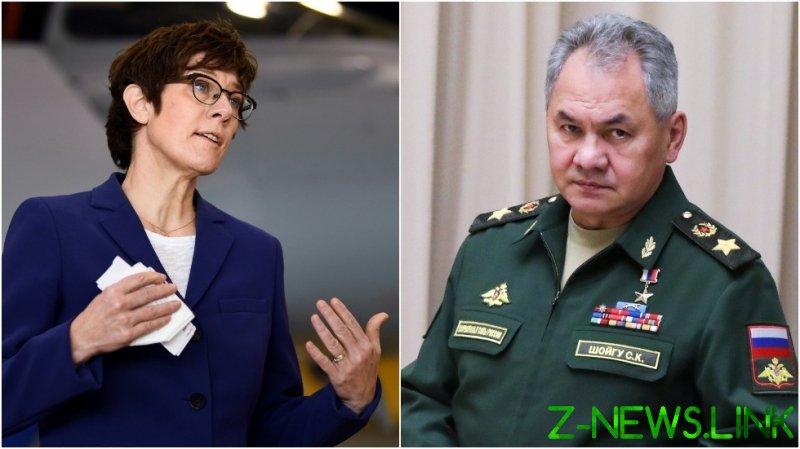 German Defense Minister Annegret Kramp-Karrenbauer has been one of the most active backers of NATO’s new master plan to counter Russia in case a military conflict breaks out between the sides. The strategy, which was agreed on Thursday, envisages the military alliance’s troops fighting Russian forces in the Baltic region and across the Black Sea, while also calling for non-conventional warfare, including nuclear weapons, cyber-attacks, and space military technology, to be employed.

“This is the way of deterrence,” Kramp-Karrenbauer told German radio Deutschlandfunk earlier this week, commenting on the idea of deploying nuclear weapons in the air above Latvia, Lithuania, and Estonia to protect them from what NATO calls the “Russian threat.”

“We must make it very clear to Russia that we are ready to use such measures as well, so that it would have an early deterrent effect… This is being adapted to the current behavior of Russia,” she insisted.

On Saturday, Shoigu told his German counterpart that “security in Europe can only be collective without infringement of Russia’s interest. But currently NATO is the party that’s not ready for equal dialogue on this issue.”

“Amid calls to deter Russia militarily, NATO is consistently building up its forces near our borders. The German foreign minister must know quite well how such actions have ended for Germany and Europe previously,” he added.

The Russian defense minister also recalled the chaotic withdrawal of the US and its NATO allies from Afghanistan in August as the country fell into the hands of Taliban. The Western deterrence plan in Afghanistan ended in “a catastrophe, with which the whole world now has to deal,” he said.

Former Austrian foreign minister Karin Kneissl told RT on Saturday that she “wouldn’t overrate” the statements made by Kramp-Karrenbauer. She is part of outgoing Chancellor Angela Merkel’s government and is about to quit her minister’s post. Her future in parliament may be in doubt, as the evacuation of German troops from Afghanistan, which she oversaw, turned out a “failure,” Kneissl pointed out, arguing that Kramp-Karrenbauer “is not a strong political figure anymore.”