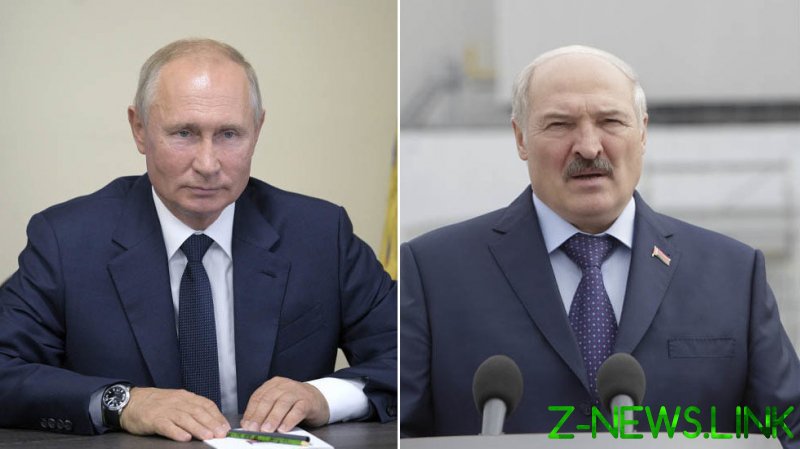 At a meeting in Sochi as part of a personal visit by Belarusian leader Alexander Lukashenko and his Russian counterpart Vladimir Putin, the pair agreed that another move eastwards by the US-led alliance would be met with a strong response, according to the Russian president’s spokesman.

Dmitry Peskov added that the two leaders discussed the subject of Ukraine’s potential accession to the bloc on numerous occasions, and that any kind of move would cross one of Putin’s “‘red lines’ that he has repeatedly spoken about before.” Such an event would require some form of retaliatory action “that would ensure the security of our two allied states,” the press secretary added.

Concerns about Ukraine joining NATO are not new, with Putin clearly stating back in June that Kiev signing up to the organization would be seen as a security threat by Moscow. At the time, he also praised “smart” Ukrainians for opposing any attempts for their country to join the American-controlled bloc, explaining that “they don’t want to be a bargaining chip or cannon fodder.”

Nevertheless, Ukrainian leader Volodymyr Zelensky plans to host 15 countries who will take part in a combined military exercise program this month (Combined Efforts-2021), in the publicly announced hope of solidifying NATO’s presence in the Black Sea.

“An unacceptable situation will arise on the border between Russia and Belarus,” Lukashenko said on Monday, further stating that “[The leadership in Ukraine] don’t care about their own people and they don’t hear us expressing these concerns.” He also said that an escalation of the situation could include “the deployment of missiles of appropriate range.”

Neither Lukashenko nor Putin are alone in expressing their deep-rooted concerns around Ukraine joining NATO. On Friday, the Hungarian foreign minister also voiced his apprehension about Ukraine joining the organization, but on the basis that it failed to meet required criteria. Péter Szijjártó said that Kiev was responsible for violating the rights of ethnic Hungarians in Ukraine, adding that the country has not yet achieved the necessary “democratic standards” needed to be accepted into the bloc.