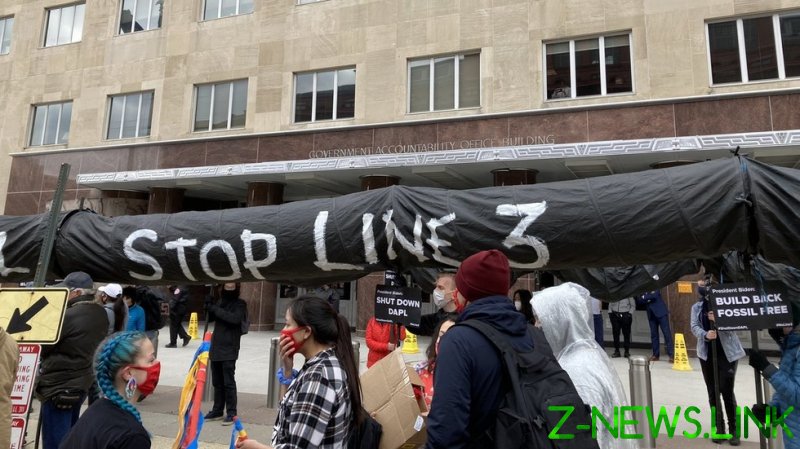 Indigenous activists first made headlines with massive protests against the Dakota Access pipeline (DAPL) in 2016, setting up a makeshift camp near Mandan, North Dakota to block construction. The standoff ended in February 2017, with hundreds of police forcibly dismantling the encampment.

On Thursday, hundreds of activists delivered a petition with over 100,000 signatures to the Army Corps of Engineers in the US capital, protesting the pipeline’s “encroachment on their land and water rights” and urging the Biden administration to cancel the permits to expand the pipeline – and even dismantle it altogether.

As part of the protest, activists carried a 250-foot “black snake” – a symbolic representation of the pipeline – through the streets of DC, before “killing” it outside the White House.

Line 3 is another pipeline that activists say would run through indigenous lands and endanger their water with potential spills. The proposed pipeline is supposed to run from the tar sands in the Canadian province of Alberta to Superior, Wisconsin.

Protesters, many wearing masks, held up signs and chanted against the two pipelines and fossil fuels as they marched through DC, demanding the Biden administration “keep it in the ground” and focus on solar energy instead.

One activist who faces trespassing charges for protesting against the pipelines spoke at the DC rally.

One of the first things Biden did upon inauguration was cancel the Keystone XL pipeline that was supposed to run from Alberta to the Kansas-Nebraska state line, and ban fracking on federal land.

As for Dakota Access, activists briefly celebrated last July, when a federal judge ordered its operator, Energy Transfer Partners, to stop operations for a mandatory environmental impact review – which could have taken up to 13 months. An appeals court overruled the decision a week later, however, allowing the 570,000-barrel-per-day pipeline to keep running.

Native Americans and their environmentalist allies argue that the pipeline will inevitably lead to spills and contaminate the land and water resources of tribes such as the Standing Rock and Cheyenne River Sioux, whose lands it touches on.