Home / Video news / Nationalists and ultras stopped the bus with the players of Shakhtar. Video

Nationalists and ultras stopped the bus with the players of Shakhtar. Video 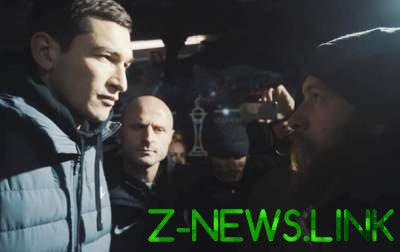 Nationalists and football fans laid claim to the football club for the position in relation to the ATO.

Representatives of National housing, which were members of fan groups Kharkiv City Patriots and The Club stopped the bus with the players of Shakhtar in Kharkiv near the Metallist stadium, according to the page, Troublemakers & Ultras Action in Facebook.

It is noted that players of football club “stopped to talk”. They were accused of “bizarre actions and vague position” in relation to the ATO.

Nationalists and ultras threatened that if the players do not wear t-shirts in support of the military before tomorrow’s match of the Cup of Ukraine with the Veres, they will have to return to Donetsk.

Player Taras Stepanenko has promised that the team will come in t-shirts and Andriy Pyatov added that the players help the Ukrainian military, however, do not do it publicly.

See also:  "Giant" Putin at the festival of horrors blew up the network. Video

Earlier media reported that before the match against Olympique manual miner allegedly banned children of the ATO participants to go along with your football shirts “My dad is a Hero.”

In response, the football club said that as the guest team had no relation to the organization of the game.