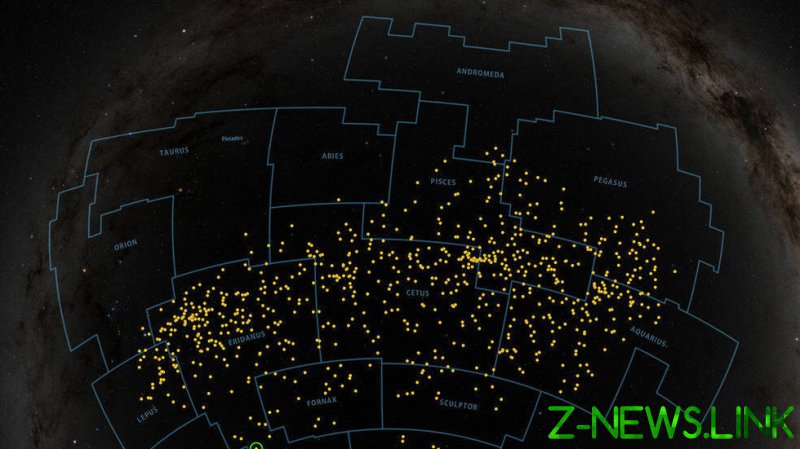 The three hot worlds, each slightly larger than our own, were detected orbiting a much younger version of our sun called TOI 451, located some 400 light-years away in the constellation Eridanus.

The star boasts 95 percent of our Sun’s mass, despite being 12 percent smaller and emitting 35 percent less energy. It also rotates five times faster than our Sun, making for a much more intense environment for its budding star system.

Its most distant planet orbits three times closer than Mercury ever comes to our Sun, so each of these worlds is extremely hot and almost certainly uninhabitable to life as we know it, with atmospheric temperatures ranging from highs of 2,200 degrees Fahrenheit (1,200 degrees Celsius) to ‘lows’ of  840 F (450 C) in the outermost world.

Scientists expect that, despite the intense heat and crushing proximity to their star, these planets still retain their atmospheres and could serve as useful examples to study in terms of atmospheric formation and development over time, albeit in extreme circumstances.

The planets’ signatures were initially detected in December 2018 and were later confirmed by numerous analyses, using some of the Earth’s most powerful telescopes and observatories.

The hot worlds were discovered in the Pisces-Eridanus stream of stars, which is less than three percent the age of our solar system, and spans a third of the sky visible from Earth.

NASA researchers suspect the system retains a cool disk of dust and rocky debris, and may also have two stellar companions dancing around each other in an orbit far beyond the planets. This makes it a useful example to study with regard to the evolution of nascent star systems, potentially yielding insights into our own.

“It’s only 120 million years old and just 400 light-years away, allowing detailed observations of this young planetary system,”  said Elisabeth Newton, an assistant professor of physics and astronomy at Dartmouth College in New Hampshire, US, who led the research.

“And because there are three planets between two and four times Earth’s size, they make especially promising targets for testing theories about how planetary atmospheres evolve,” she added.

The discovery is expected to yield additional insights into how atmospheres form around nascent planets in the universe, potentially helping to refine humankind’s search for both habitable worlds for colonization and intelligent extraterrestrial life.

“TESS data will continue to allow us to push the limits of what we know about exoplanets and their systems for years to come,” said Jessie Christiansen, deputy science lead at the NASA Exoplanet Archive.