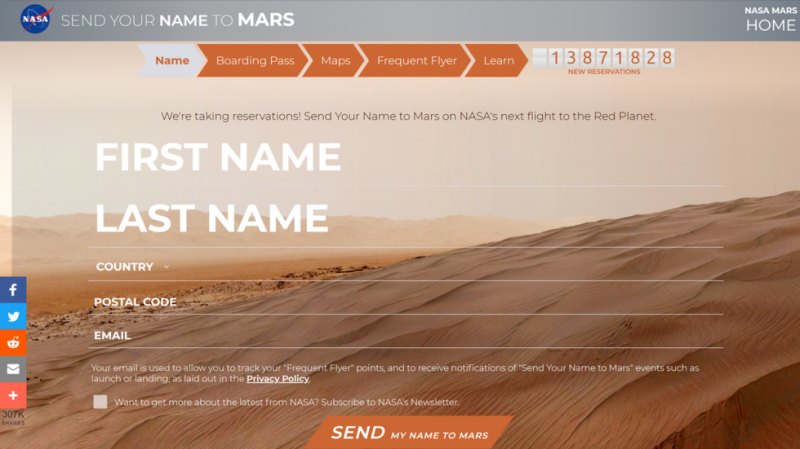 The menu of discord is part of NASA’s Send Your Names to Mars project, which allows individuals around the world to reserve personalized microchips for inclusion in the next US mission to Mars, scheduled for 2026. Among other things, it asked the applicant to choose their country of origin – and listed Taiwan as a separate option one could pick.

As the choice apparently clashes with the One China policy, it did not sit down well with the Chinese officials, prompting state-linked media outlets to roll out several articles blasting the design.

Emphasizing “there is only one China,” the Chinese Communist Party-affiliated People’s Daily website called NASA’s menu an “unforgivable mistake” that “violates the norms of international relations.”

Of the 18.4 million people that have “reserved” their names to be sent to Mars, the online project has racked up more than 4 million registrations from China – compared to 2.6 million from the US and around 75,000 listed separately under Taiwan. People’s Daily has hinted that the Chinese are thinking of rescinding their support, or have already done so, saying that the people “have the right to say no to actions that damage China’s interests.”

Hours after the public backlash, NASA’s page has apparently been quietly updated, somewhat watering down the definition of the choice offered to applicants. Instead of “Country,” the page now asks for “Location,” and the dropdown menu suggests picking a “Country/Region/Territory.” NASA is yet to release any public statement addressing the issue.

NASA’s listing comes on the heels of US Secretary of State Antony Blinken calling Taiwan a “country” during congressional testimony delivered on March 10. The remark broke with longstanding US policy not to refer to the island in that way.

Washington has recognized the Chinese Communist Party government in Beijing as the one legitimate authority in China since 1979, yet according to the State Department the US seeks to keep “strong, unofficial relations with Taiwan,” ruled by descendants of the nationalists who fled defeat in the civil war on the mainland in 1949.

Beijing considers Taiwan as entirely part of its sovereign territory, and has historically regarded it as a key foreign policy issue. The island’s government in Taipei rejects the One China policy.

China’s war of words with the US over Taiwan has erupted in other sectors before. US airlines no longer refer to the island as a country thanks to a 2018 spat with Beijing. That same year, hotelier Marriott International suffered a website blackout in China after letting surveyed customers refer to Taiwan as a country.

Washington’s deep military ties with Taiwan have also angered China. On Wednesday, the Taiwanese Air Force announced a deal to buy upgraded US Patriot missiles to address “the threat from the enemy,” according to a spokesman. China has committed to sanctioning Lockheed Martin, the manufacturer of the missiles, over a $620-million deal signed earlier with Taipei.

NASA is not just a target for Beijing’s ire over Taiwan’s designation. The Chinese and US space agencies have been involved in an increasingly heated rivalry for space-exploration dominance. Weeks after NASA’s unmanned Perseverance rover landed on Mars in February, Chinese lunar-exploration chief Wu Weiren announced detailed plans for launching Chinese probes and eventually manned missions to explore the Moon.

Armed with a recently agreed memorandum of understanding with Russia to build an ambitious research station on the lunar surface, Wu stated the plans would allow for “a long-term lunar stay for Chinese astronauts” as contrasted with the short-term Moon landings achieved by US astronauts.