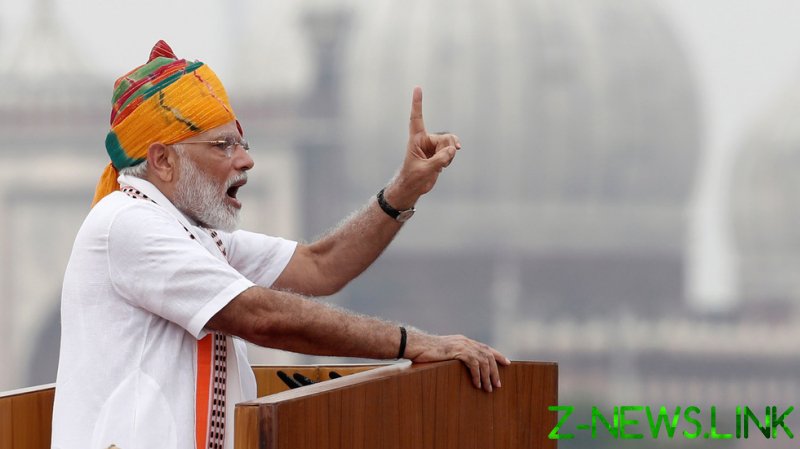 Under the leadership of the Bharatiya Janata Party (BJP) and the right-wing government of Narendra Modi, India has sought to recall and glorify the ancient Hindu cultural narrative at the expense of hundreds of years of history.

This policy, often referred to as ‘saffronisation’ (a reference to the spiritual use of the saffron colour with Hinduism) is encouraging the erasure of the legacies of the British and the Mughals – a Muslim dynasty that ruled the country for nearly three centuries.

India’s cancel culture has its roots in the middle of the 20th century and the advent of Hindu-majority rule. As in many other newly independent states, the country’s post-colonial governments embarked on a programme of renaming cities, streets and public places, as well as reintroducing aspects of their indigenous culture.

These changes emphasize the search for renewed national identity, resilience and purpose, as well as representing a stiff middle finger to their former colonial overlords. In some countries, the agenda lost momentum but, in India, the movement continues with vigour, more than 70 years after Delhi gained independence from London.

In the wake of the Black Lives Matter movement, and the accompanying onslaught of wokeness, many in Britain and the US might turn their nose up at the thought of renaming cities, streets and buildings. But in India it’s been a feature of politics for decades.

Bombay to Mumbai, Banaras to Varanasi, United Provinces to Uttar Pradesh; some of the changes that saw India rid itself of colonial names and erroneous transliterations were the precursor to the current, more sinister, agenda.

Nowadays, Britain’s legacy appears less problematic to India’s nationalist politicians than centuries of Muslim conquest. Nevertheless, there are still changes; earlier in October, it was announced that Mount Harriet National Park – named after Indian-born British artist Harriet Tytler – would be renamed as Mount Manipur to honour freedom fighters who fought London’s rule and were imprisoned in 1891.

While the names may change, though, some aspects of Britain’s legacy remain, such as its administrative system, the academic structure and use of the English language. There are also close political and cultural ties with London.

Instead, the BJP has another focus, the legacy of Muslim rule – and what makes this more concerning is that there are some 170 million followers of Islam living in India, while very few Brits still call the country their home. To many, the BJP’s persistence in erasing the Mughal legacy is a persistent attack on Islam, and on millions of Muslims who reside in India.

Just one year after Modi came to power in 2014, taking over from the Indian National Congress Party and Prime Minister Manmohan Singh, street signs in New Delhi carrying Urdu or Muslim-sounding names, including Aurangzeb Road – named after a Mughal emperor – were painted black by a radical Hindu organization, Shiv Sena Hindustan.

A few months later, BJP politicians “corrected the mistakes of [their] history” and renamed the arterial Aurangzeb Road to Dr A P J Abdul Kalam Road, in honour of the recently deceased pro-BJP ex-president.

The following six years have seen BJP leaders embark on a spree of renaming with the aim of removing the Mughal legacy and promoting their own Hinduism-centred narrative. In 2018, the party saw it necessary to rebaptise the city of Allahabad, home to some 1.5 million people, as Prayagraj, just months before welcoming the Hindu mega-festival Kumbh Mela.

The city, which had held its name for some 443 years, becomes a pilgrimage site for millions of Hindu worshippers every 12 years and its new name is intended to reference the festival. The name Allahabad dated to the 16th century when the city was founded by Mughal Emperor Akbar.

Once again, there was more alarming rhetoric accompanying the change. “Today, the BJP government has rectified the mistake made by Akbar,” a BJP official told local media.

But it’s not only cities and streets that are falling victim to the BJP vision to make India, and its history, more ‘Indian.’ With local elections pending, this summer BJP politicians embarked on a host of new changes, including the standard renaming of cities.

In Haryana, state leaders decided to outlaw the use of the term Gorakh Dhanda (Urdu for complicated business) in official communication. It was deemed that the phrase was offensive to followers of Gorakhnath – a 12th century (or earlier) Hindu saint who founded a sub-movement within the religion.

But perhaps even more sinister was the recommendation this year by the Indian Council for Historical Research to delete the names of 387 Muslim freedom fighters who’d waged war against British colonial forces, from a Dictionary of the Martyrs of India’s Freedom Struggle. The government-controlled body was widely criticized by the martyrs’ descendants for the proposal, which came almost exactly a century after their martyrdom, on August 26, 1921.

Cancel culture is contentious at the best of times, but India’s move to plaster over its Mughal history is particularly depressing because Muslim rule on the subcontinent reflects one of the wealthiest and arguably most fascinating periods of Indian history.

During nearly three centuries of rule, which at its peak extended across almost the entire Indian subcontinent and into Afghanistan, the Mughals brought with them Persian culture and art as well as an effective centralized governance. The empire became one of the richest and most powerful in the world and, at times, its Muslim leaders oversaw periods of great religious tolerance, although Hindus often struggled to have the same rights as followers of Islam.

The Mughal Empire’s vast architectural achievements include the Qutb Minar – a UNESCO world heritage site in New Delhi – and the Taj Mahal, an immense mausoleum of white marble in Agra which attracts some seven to eight million visitors each year. The town of Fatehpur Sikri – a magnificent red sandstone and marble conurbation – is yet another physical legacy deemed by UNESCO as a site of outstanding universal value. The edifices are the pinnacle of a building program which saw the construction of reservoirs, bridges, gardens and mosques as well as a vast trading infrastructure.

Some even contend that the Mughals were important for uniting the various kingdoms and federations of the Indian subcontinent, and thus possibly playing a key role in later India unity.

But what’s most concerning is that many of India’s Muslims, perhaps understandably, feel under attack by the manifestations of Hindu nationalism which increasingly alienate them and erase their own culture in the country they call home. Seven decades into Hindu-majority rule, it remains to be seen how many more Mughal “mistakes” need to be rectified.