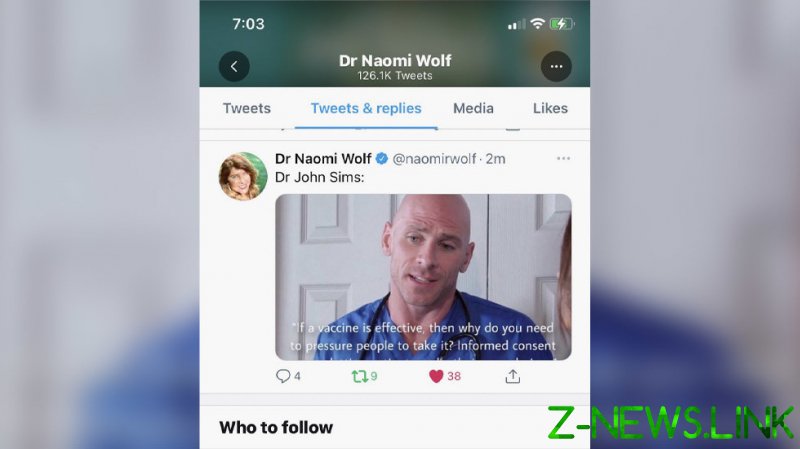 It wasn’t long before Wolf published the quote on her own Twitter account, at which point Klippenstein took credit for the prank. Wolf then deleted her post.

Social media users mocked Wolf for falling for the prank and failing to vet her sources, and the incident even caught the attention of Sins himself, who retweeted screenshots of Wolf’s goof.

Wolf has previously been ridiculed for failing to verify sources, claiming in February that she had overheard an Apple employee “boasting about attending a top secret demo” where “they had a new tech to deliver vaccines w nanopatticles that let you travel back in time.”

Wolf was also accused in February of confusing child sexual abuse and bestiality with persecution against gay people in Victorian England in her book ‘Outrages’.

As for Klippenstein, the journalist has a long history of pranking public figures online. In November, he tricked former acting director of national intelligence and war hawk Richard Grenell into thanking convicted war criminal William Calley – who killed 22 Vietnamese civilians in a 1968 massacre of 500 men, women, and children during the Vietnam War – for his military service.