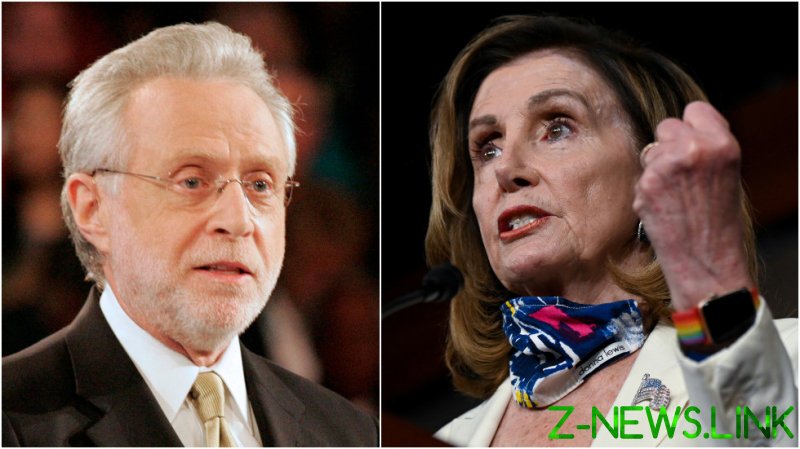 Tuesday’s outburst – which provided comic relief for critics of CNN’s anti-Trump and anti-conservative bias – came as Blitzer grilled Pelosi on why she hasn’t come to agreement with Republicans on economic-relief legislation after the Trump administration offered a $1.8 trillion package.

The interview went off the rails as Blitzer pointed to the fact that some House Democrats want to accept the proposal, citing a tweet by Representative Ro Khanna saying the offer was more than double former president Barack Obama’s economic-stimulus program in 2009. “People in need can’t wait until February,” Khanna said, referencing when relief checks might go out if the issue is tabled until after the November 3 election.

“I don’t know why you’re always an apologist, and many of your colleagues apologists for the Republican position,” Pelosi told Blitzer. “Ro Khanna, that’s nice. That isn’t what we’re going to do, and nobody’s waiting until February.”

Blitzer persisted, pointing out that millions of Americans have lost their jobs and can’t pay their rent or buy food for their families. He said, “Don’t let the perfect be the enemy of the good” and cited a conversation with former Democrat presidential candidate Andrew Yang, who also favors compromise.

“Honest to God, you really, I can’t get over it,” Pelosi said. “Andrew Yang, he’s lovely. Ro Khanna, he’s lovely. They’re not negotiating this situation. They have no idea of the particulars.” She then told Blitzer that “you really don’t know what you’re talking about,” and said he needs to show “some level of respect” to the people who have worked on the legislation.

Blitzer then tried to wrap up the interview, but both he and Pelosi resisted giving each other the last word. After Pelosi again told him he was wrong on the issue, Blitzer said, “It’s not about me, it’s about millions of Americans who can’t put food on the table, who can’t pay the rent.” Pelosi then talked over the host, saying, “We represent them, and we know them.”

As Blitzer again hinted that the interview was ending, thanking Pelosi, she snarked, “Thank you for your sensitivity to our constituents’ needs,” to which the host replied, “I am sensitive to them because I see them on the street begging for food, begging for money.” Pelosi was again triggered, saying, “Have you fed them? We feed them. We feed them.”

Twitter users found the exchange hilarious, with journalist Glenn Greenwald saying, “This is simply unbelievable… Not sure I’ve ever seen a performance quite like this, especially given what’s at stake.” He added, “She feeds them.”

Podcast host Saagar Enjeti was among many observers who believed the interview was proof that Pelosi’s refusal to compromise was an effort to make President Donald Trump look bad heading into the election. “She will let the country burn as long as it helps Biden’s re-election.” Journalist Curtis Houck agreed: “When even CNN and Wolf Blitzer are grilling Nancy Pelosi on why Democrats continue to reject any and all Republican stimulus offers, you know Dems might be playing politics.”