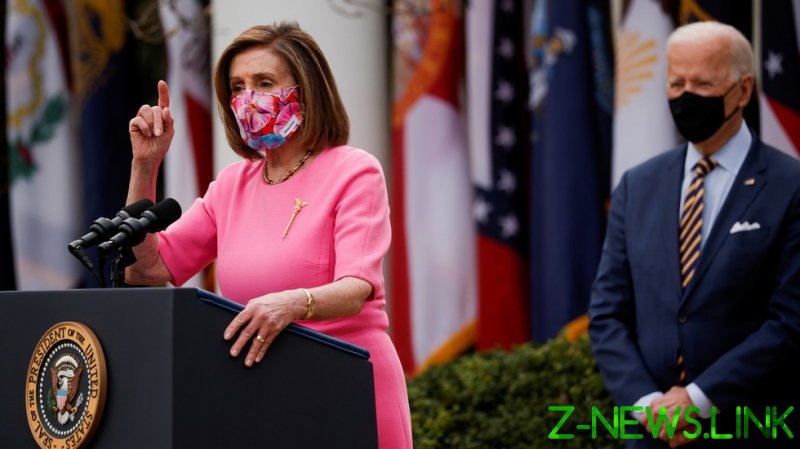 “What the (Biden) administration has inherited is a broken system at the border, and they are working to correct that in the children’s interest,” Pelosi said on Sunday in an interview with ABC News. She went on to praise President Joe Biden for sending FEMA to help accommodate a surge in unaccompanied minors arriving at the border.

Biden’s administration has faced criticism over policies encouraging migrants to flood into the US, even amid the Covid-19 pandemic, including growing numbers of children. After the government reopened child detention facilities that Democrats decried as “human rights abuse” when they were deployed by Trump, White House press secretary Jen Psaki spun the move, saying last month, “This is not kids being kept in cages. This is a facility that was opened that’s going to follow the same standards of other HHS [US Department of Health and Human Services] facilities.”

The number of unaccompanied children crossing the border jumped about sevenfold after Biden took office on January 20, rising above 300 a day last month. Border Patrol reportedly had a record-high 3,200 children in custody as of early March, about half of whom were held beyond the three-day limit to be transferred to HHS for placement with sponsors in the US.

Trump has said that he achieved the most secure border in US history, but Biden has let the situation spin “totally out of control.”

However, Pelosi claimed the current struggle reflects “a transition from what was wrong before to what is right.” Washington also must address corruption and violence in Central America and Mexico, as well as climate change, to deal with the reasons that people are fleeing to the US, she added. “There are many reasons that go into this, but the fact is, we have to deal with it at the border,” she said.