Home / business / Named the most persistent absentees in Parliament

Named the most persistent absentees in Parliament 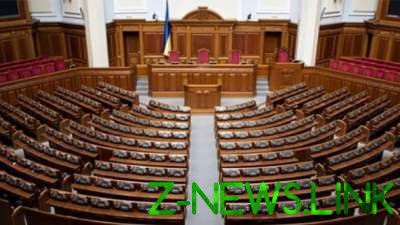 People’s deputies of Ukraine in September not too eager to go to work in the Verkhovna Rada. The MPs participated only in 25% of all the votes.

This is evidenced by the movement research “Honestly”.

According to the report, in September the Parliament of Ukraine worked in a sessional hall 7 days, held 11 meetings, which occurred 933 vote.

According to the official website of the Verkhovna Rada, 19 MPs have never voted. Among these deputies 7 was absent during all of the September polls.

1. Sergey Klyuev (independent), who Interpol declared in the international search.

2. Vyacheslav Konstantinovsky (independent), who in the summer wrote a statement of resignation of Deputy mandate.

3. Alexander Onishchenko (independent), who is hiding in London from the criminal case of plunder of property “ukrgazvidobuvannya”.

4. Dmitry Yarosh (independent), who during the whole cadence of the Verkhovna Rada took part in only 2.8% of the vote.

5. Vitaly Chepinoga ( “Block Poroshenko”), which for the whole cadence of the Verkhovna Rada took part in only 3.1% of the vote.

6. Evgeny Bakulin ( “Opposition bloc”), which is involved in anti-corruption investigations.

7. Vadim Rabinovich (the “Opposition bloc”), which for the whole cadence of the Verkhovna Rada took part in only 1.5% of the votes and occupied mainly by the promotion of the party project “For life”. 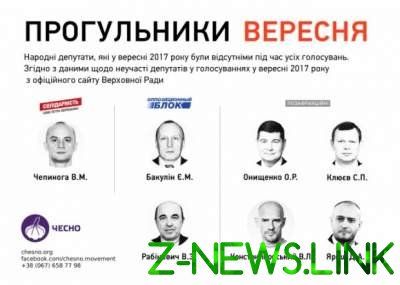 Activists noted that Klyuyev, Onishchenko and Bakulin were absent at the meetings of the Board in July.

Regarding the voting in Parliament, in their large numbers were not involved deputies from the faction “people’s Will” (93,1%), Vozrozhdenie (92,5%) and “Radical party Lyashko” (91,8%), the least – deputies from “Samopomich” (participated in 60.1% of votes). 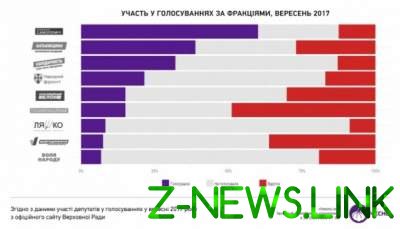 It is noted that most elected officials do not participate in the voting, while being in the session hall of the Parliament. In particular, the deputies from the “Radical party Lyashko” missed more than 90% of the vote, although it was absent only in 8.8% of the votes.

Most polls of September (at 48.9%) skipped non-faction deputies.