Home / WORLD / Naked fury! How a nude statue honouring a feminist pioneer sent the ‘liberal’ mob into a full-on frenzy

Naked fury! How a nude statue honouring a feminist pioneer sent the ‘liberal’ mob into a full-on frenzy 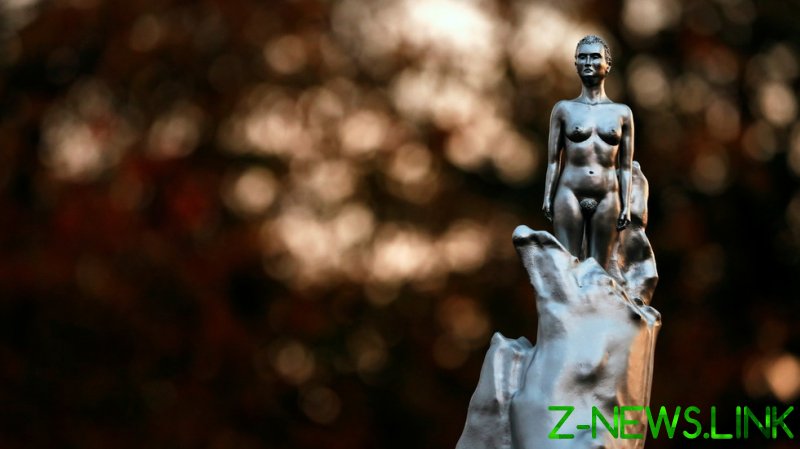 Watching the launch video on Facebook that accompanied the unveiling of the controversial statue dedicated to pioneering feminist rebel, Mary Wollstonecraft, you cannot help but notice that all the foundation work, the smelting and the heavy lifting is done by men.

And proper workmen at that… yellow vests, with trousers slung low, branded underwear band cheekily revealed and all the self-congratulation of males admiring their own job well done. It makes for brilliantly ironic viewing, but it is not this that has caused a massive online storm.

The result of their masculine toil is a big silver statue, erected in honour of a true 18th century feminist pioneer, that cost northwards of £140k and was sculpted by Maggi Hambling. The problem is that a lot of people hate the finished product. And I mean, really, truly, hate it.

Admittedly the completed work is not a Madame Tussauds-style depiction of Wollstonecraft. It’s more of an interpretation, kinda thing. It’s a melted mixture of female forms in the shape of a rocket blasting a small, naked, silver woman skywards. Hambling herself points out that the statue is not “of” Wollstonecraft, but “for” her, adding that the nude is an everywoman, not a true-to-life depiction of Mary.

But that doesn’t appease her self-appointed patrons. The virtue-signallers who chipped in a fiver to the crowdfunding campaign wanted something more… more… more Mary-like. And when the big reveal arrived yesterday, well, it was not what they were expecting.

These Poundland Medicis were seething with indignation. One, Jessi Swift, wrote: “Definitely wasn’t what was stated when we donated money for it. It was ‘her presence in physical form’ not an abstract depiction of an Everywoman. This feels really deceptive and people feel betrayed.” Betrayed? Poor love.

Let’s get this straight, this is not Michelangelo’s Sistine Chapel, nor is it Auguste Rodin’s 10-years-in-the-sculpting The Kiss. It is a statue on a plinth in a public park in Stoke Newington, a north London habitat that provides home to many of the capital’s right-on liberals, the sort of folk who strongly believe that contributing a fiver on the internet gave them full permission to dictate exactly how the sculpture should have turned out.

Stoke Newington also happens to be the neighbourhood where Mary Wollstonecraft spent much of her short life – she died aged just 38 – providing the education for girls for which she fought for, having been denied that by her own alcoholic and abusive father.

Okay, so the crowdfunders are disappointed. So what? You wanted a statue and donated some cash, here it is. But it’s not just the disillusioned donors who are upset. Plenty of others felt compelled to use their status as self-appointed culture protectors to vent their spleen on social media.

Here’s a flavour. “I am genuinely crying with laughter at the new Hambling statue of Mary Wollstonecraft. The disrespect. Huge botched Ecce Homo energy,” from Guardian writer Hannah Jane Parkinson.

It’s “a truly terrible work of art,” according to The Art Newspaper’s contributing editor Anny Shaw while another Twitter user complained the finished work “looks like crunched up aluminum foil from an old kebab with a female figure poking out the top”.

Oh, and the nudity, the nudity! Some have taken offence at the naked female form that tops the statue, with Dr Laura Wood demanding to know, “How many of our important male writers are depicted naked in their statues? You never see Charles Dickens with his balls out, do you?”

The condemnation continued, “Specifically what I hate is the sexy toned female on top. Nameless, nude, and conventionally attractive is the only way women have ever been acceptable in public sculpture.” Or from another confident and self-appointed expert, “Gross. Not even an elegant female form. More like a Thunderbirds puppet.”

And it went on and on. “Very disappointing that, in tribute to an inspiring, extremely talented writer and feminist, we get yet another naked woman with badly defined face but heavily emphasised genitalia. Again reducing women to a collection of sexual bits – I don’t get the connection to Wollstonecraft.”

Overnight, we could have expected the fury to dissipate, but instead it only went from red-hot to white-hot. After what no doubt was a sleepless night of tossing and turning, one furious feminist decided to dress the statue with a black t-shirt emblazoned with the word “woman”, in a wonderfully destructive act of cultural facism.

The perpetrator here decided that because she/he/they were so outraged by this piece of silver-plated bronze, no one else should be allowed to see the work as it was intended for display in case their head exploded, or at least that’s what I’m guessing.

Wollstonecraft wrote, “I do not wish them [women] to have power over men; but over themselves.” Somehow, I don’t think the jaw-dropping sense of entitlement – often gained through years of university education, enough to blow the mind of Mary Wollstonecraft – that provides a launch pad to bully, berate and belittle one another online is the “power” that this 18th century heroine had in mind.

In choosing to display a disgraceful lack of tolerance or understanding for opinions or interpretations that don’t align perfectly with their own, the liberal bullying cowards have reared their heads once again. Surely, it’s only a matter of time before an angry mob gathers to drag the statue from its plinth and chuck it in the River Thames, much like Wollstonecraft did to herself when she discovered her first husband had betrayed her?

Fortunately, at that time passing watermen rescued her from the river and the author of A Vindication of the Rights of Woman and Thoughts on the Education of Daughters lived to later bear a baby daughter, although Mary died 11 days after giving birth.

That infant was Mary Shelley, later to be the author of Frankenstein. Her literary depiction of those in an ignorant mob exposing their prejudice and intolerance has resonated strongly ever since.

Today, we can see that mob in action again, howling and wailing in fury on social media at what they cannot understand. And this time the target of their ire is a shiny, silver-plated statue in honour of an 18th century feminist standing in a humble north London park.