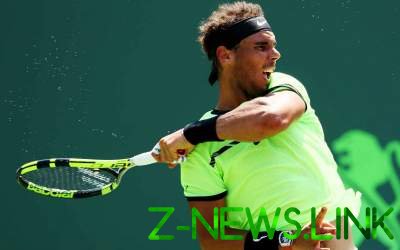 Spanish tennis player Rafael Nadal early secured an appointment in 2018 in the status of the strongest tennis player in the world.

It was expected that the leadership in the ATP ranking to Nadal at the Final tournament will compete with Roger Federer, but the Swiss after winning the tournament in Basel decided to skip the masters in Paris. Nadal to be out of reach for a single pursuer, in the French capital
it was enough to win. The Spaniard with this task confidently coped, having beaten in the second round of the Korean Hyung Jong (7:5, 6:3).

Nadal started the season in the status of the ninth racket of the world. The Spaniard reached the final at the Australian Open, then in the tenth times won Roland Garros, and the first racket of the world became again in August, replacing the title of Andy Murray. Their lead Rafael confirmed at the US Open, becoming a three-time winner of the U.S. Open.

In 2017 Nadal 10 times they reached the finals at the ATP tournaments and has issued six titles (Monte Carlo, Barcelona, Madrid, Roland Garros, US Open and Beijing).

Rafael Nadal for the fourth time in his career, finishes the season in the status of the first racket of the world (2008, 2010, 2013 and 2017). According to this indicator, the clay king caught up with John McEnroe, Ivan Lendl and Novak Djokovic. Only Nadal ahead of Pete Sampras (6), Jimmy Connors and Roger Federer (5).