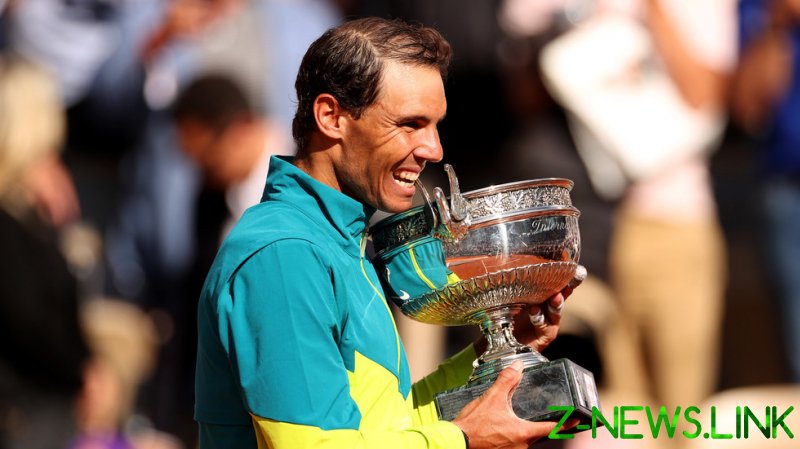 Rafael Nadal prolonged his dominance at Roland Garros on Sunday when dispatching Casper Ruud in the French Open final and winning his 14th title at the tennis grand slam.

Throwing his racket to the ground when victory was confirmed, Nadal broke down into tears as he pulled two ahead of generational rivals Novak Djokovic and Roger Federer with his 22nd grand slam win.

After kissing and lifting the trophy and hearing the Spanish national anthem played, Nadal, who turned 36 on Friday, first thanked the crowd in French and then gave his best wishes to Ruud and his family.

Nadal addressed his own camp and admitted that if it weren’t for their love and support, he would have undoubtedly retired due to constant injuries such as that suffered in his foot which ruled him out of most of 2021.

Calling the French Open the “best tournament in the world” and telling its organizers that they make him “feel at home”, Nadal also said that it was “very difficult” for him to describe the feelings that victory gave him.

“It’s something that I never believed; [that] I would be here at 36, being competitive again, playing in the most important court of my career one more time in a final.

“It means everything to me,” Nadal continued. “It means a lot of energy to try to keep going. I just want to say merci, merci beaucoup.”

Possibly ruling out retirement, Nadal admitted that he didn’t know “what can happen in the future” but vowed to “keep fighting to try [and] keep going”.

On Twitter, Nadal was congratulated by his favorite football club Real Madrid for his “historic feat”.

“It’s an honor being able to enjoy a great Madridista and honorary club member as the best tennis player of all time,” the La Liga giants said, while further congratulating him for his 22nd career Grand Slam and 14th Roland Garros title which is “without doubt a magic number in 2022” in a nod to Los Blancos’ 14th Champions League crown that Nadal saw them lift at the Parc des Princes eight days ago.

Shortly after the triumph was confirmed, the Spanish version of the Wikipedia encyclopedia website was updated to say that Roland Garros “is an official grand slam tennis tournament where 127 tennis players and Rafael Nadal participate”.

“The objective is to get to the final and lose it against Rafa,” it concluded.