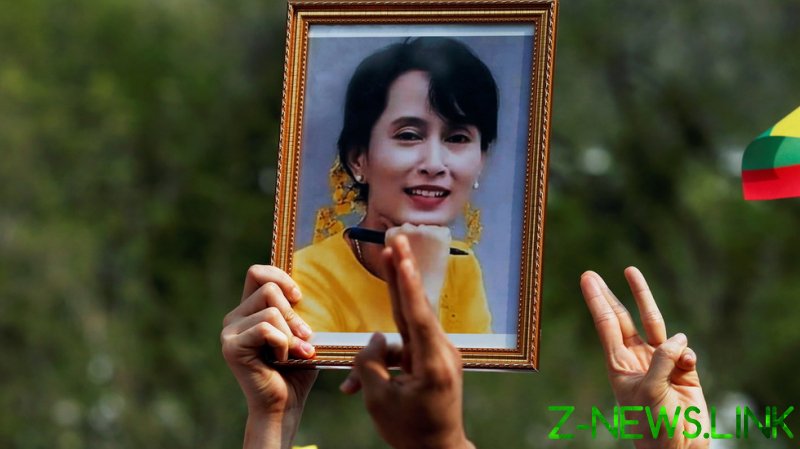 The deposed politician also had a face-to-face meeting with her legal team that lasted for about 30 minutes, Suu Kyi’s lawyer Thae Maung Maung told Reuters. The ousted leader “wished people good health,” sending an apparent message to her supporters and her National League for Democracy (NLD) party.

The NLD, which ruled the country before the February 1 coup, is now facing a forcible dissolution, as the military accused the party of rigging the elections back in November.

“What should we do with the NLD, which plotted against the law [to win the election]? The party must be abolished. And we must consider taking action against those who rigged the vote as traitors to the country,” the junta-appointed Union Election Commission (UEC) and a former major general in the Myanmar military, U Thein Soe, said on Friday as quoted by local media.

The allegation that Suu Kyi’s party won the last election fraudulently was one of the main pretexts for the military to seize power from the civilian government. Suu Kyi, along with other key politicians, has remained in the military’s custody since the coup. The ousted leader is facing various charges, ranging from smuggling electronic devices into the country to bribery.

The coup has plunged Myanmar into a prolonged period of civil unrest, with the protests against military rule having continued for nearly four months on an almost daily basis. The protests have been met with a heavy-handed police and military response, with more than 800 people killed during the crackdown, according to the Assistance Association for Political Prisoners advocacy group. The official death toll is less than half that figure – according to the military, some 300 protesters and nearly 50 police have been killed in the post-coup violence.

The coup ended a short period of civilian rule in Myanmar, which had been controlled by the military governments for most of its modern history. The military ruled the country from the early 1960s until 2011.