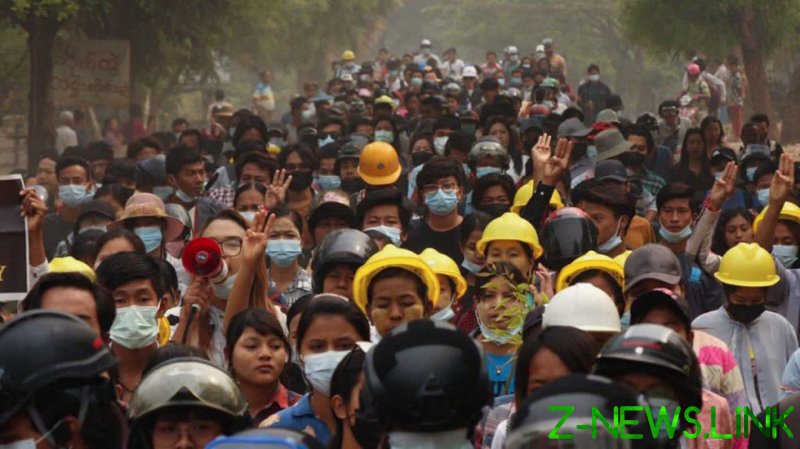 The civil unrest continued across Myanmar into Monday, with thousands protesting the February 1 coup, as well as mourning the victims of the violence. Some 114 people were reportedly killed and dozens more injured over the weekend – the bloodiest since the beginning of the protests and the military crackdown against them.

Thousands marched through the central city of Sagaing, protesting the military rule, footage from the scene shows.

The ongoing protests invoked a police and military response, with at least one person reportedly killed in Yangon when the security forces opened fire on the crowd.

“He was shot in the head,” a witness told Reuters. “They were shooting at everything on the road, even a Red Cross team. It’s still going on as I’m speaking to you.”

In Yangon, the military has reportedly been using heavy weaponry, including machine guns and grenade launchers, to quell the unrest.

Myanmar was plunged into chaos on February 1, when the military ousted the government, ending a nine-year period of civilian rule. The country was previously controlled by the military for decades, from the early 1960s to 2011.

The military claimed the recent election – which saw now-ousted State Counsellor Aung San Suu Kyi securing a comfortable win – was fraudulent. Suu Kyi has been accused by the military of various crimes ranging from corruption to smuggling illegal electronic devices into the country. Supporters of the overthrown leader, however, believe the allegations are made up and politically-charged.

The coup prompted mass protests that have rocked the country for the last two months. The military launched an increasingly brutal crackdown against the protesters, but has so far failed to bring the situation under control. Around 460 people have been killed during the protests, according to figures by the advocacy group Assistance Association for Political Prisoners.

Immediately after the coup, the military announced a one-year state of emergency. It also promised to hold elections and give the power back to the people at an unspecified point in the future.