Home / WORLD / Myanmar is a strategic headache for Beijing, but anti-China feeling in the country is not as strong as Western media claims

Myanmar is a strategic headache for Beijing, but anti-China feeling in the country is not as strong as Western media claims 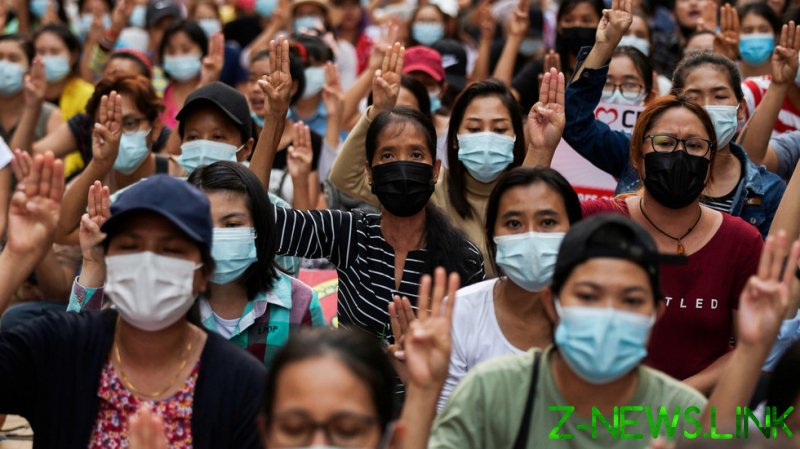 As unrest rages in Myanmar, over the weekend a number of Chinese-owned factories and businesses were torched by demonstrators in what was a deliberate attempt to blame Beijing for the coup, which saw a Military Junta take power earlier this year. Although China has not officially supported the overthrow of the country’s president Aung San Suu Kyi, it has nonetheless been accused of backing the coup, which has drawn condemnation from the West. The violence drew in a scathing editorial from the Global Times, who blamed western-backed groups for inflaming the situation.

Myanmar is not in a great state right now, but individuals and organizations in the West are doing their part to help whip up Sinophobia within the country. Deputy editor of the Guardian Simon Tisdall published a highly emotive article on Monday titled: “A child screams in Myanmar … and China pretends not to hear” directly blaming China for the situation in the country, accusing it of “whitewashing atrocities” and trotting out a number of tired anti-China clichés. Despite the allegations China has repeatedly claimed that it does not want to get involved in the conflict, and favours stability over instability. However, there appears to be a concerted effort to lay accountability on China and change the stakes of the outcome to an “anti-Beijing” proxy conflict.

It would be an insult to the people of Myanmar to assume that their discontent over the situation in their country is little more than an orchestrated ploy against Beijing. There are good reasons to be angry. The military junta overthrew a democratically elected leader (although it is worth noting Aung San Suu Kyi was never anti-China) and is relentlessly killing protesters. It’s important to note the outcome here isn’t as much as a zero-sum win/lose for China or the US as it is made out to be in the press. Beijing had no qualms about a democratic Myanmar before. They are pragmatic and stability is their preference. However, that does not mean certain groups are not pulling the strings amidst all the chaos to turn this on Beijing.

To illustrate this point, we have “The Milk Tea Alliance”– an innocuous enough moniker, but names can be deceiving. It’s an anti-China alliance set up by leading Hong Kong activists, who have been buoyed by the United States, to promote dissent around the region and resist Beijing. Myanmar is a part of it. Recently declassified documents pertaining to the US “Indo-Pacific” strategy reveal the intention to “promote activists and reformers” around Asia. This has been done by attributing funds to various organizations and individuals via NGOs and other channels. The bid to contain China is inevitably ideology driven as much as it is about the military coup. In other words, bringing in anti-China voices to influence the situation has been a key part of the strategy. It’s no coincidence that when US policy shifted from the Middle East to Asia, so did the emphasis on which “unrest” to promote.

In line with this, key Hong Kong opposition activists who have been known to receive US funding and associate with US politicians, such as Nathan Law and other leaders of the “milk tea alliance,” have been forthright in whipping up anti-China sentiment in Myanmar by insinuating that China is engineering the coup. A tweet from a leading Myanmar Human Rights activist that appeared to promote violence, although he stated he was translating a banner, also received considerable attention. The tactical goal nonetheless is clear, as it is across several media platforms, to transform Myanmar’s internal woes into a political embarrassment for Beijing, raising the stakes for them by stoking resentment against China and provoking a reaction by attacking Chinese businesses.

Already, it might be said to be a political headache for Beijing. Myanmar remains a strategic border state to China, and a keystone of the Belt and Road initiative in allowing the country to bypass the strait of Malacca. This poses the question, how does China defend its interests in the country that are now under attack, whilst actively avoiding being seen to promote the military junta? The outcome will surely be a test of China’s regional leadership and resolve.

If Beijing is prudent it should continue to avoid openly taking sides but push hard for a political settlement that de-escalates tensions and, behind the scenes, agree to work diplomatically with the United States, as well as countries in ASEAN, to find a compromise. If not, then this situation is only going to escalate as the people of Myanmar grow in their anger towards the junta. As it stands, this doesn’t have to be a win-lose game. This is not China’s Hungarian uprising, a democratic and stable Myanmar is not doomed to be explicitly anti-China, its geography imposes a limit on that, but if things continue to deteriorate and certain voices get their way in turning the screws on Beijing’s alleged culpability, it might become more difficult for China to cool down the situation and exercise restraint. Action is needed to find a settlement, and quickly.