Home / WORLD / My proposal to bathe the British Flag in 37 litres of blood: A Statement from Santiago Sierra on the cancelled Union Flag project

My proposal to bathe the British Flag in 37 litres of blood: A Statement from Santiago Sierra on the cancelled Union Flag project 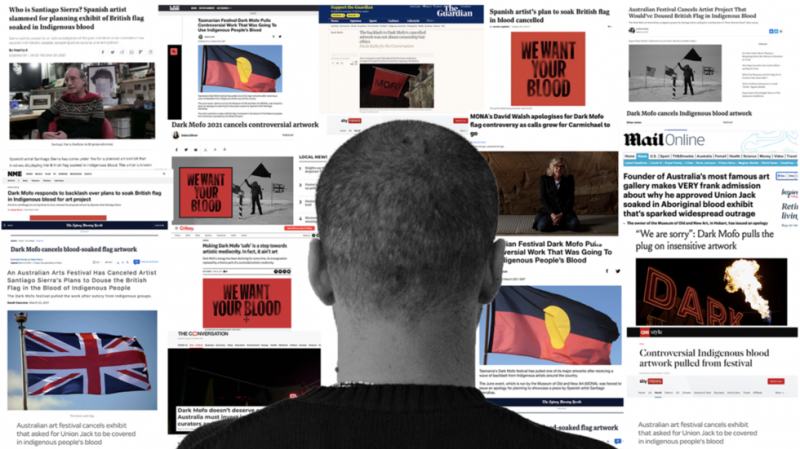 This is proved most noticeably with the religious or national symbols, which arouse a great adhesion or a great rejection.

I was invited to participate in the Dark Mofo festival in Tasmania, Australia. Australia is a nation whose native population suffered, and continue to suffer, from British colonialism. Tasmania and New South Wales were officially the first colonies on the continent, where a policy was put in place forcing Aboriginal people to live on reservations.

In Tasmania this policy took the form of a real manhunt, carried out by columns of armed white men throughout the island, which has since been known as the “Black War” or the “Tasmanian genocide”. This exclusion of the native population continues to the present day along with a murderous legacy that reverberates through the indigenous community.

I proposed ‘Union Flag’ a work that consisted of immersing the flag of Great Britain in as many units of blood as territories colonised by the British Empire (83). 20 countries in America, 10 in Europe, 25 in Africa, 18 in Asia and 10 in Oceania. One unit of blood (450 ml) would be donated by one person in each of these 83 countries. The blood was supposed to be mixed in an aluminium bucket, where the Union Flag would be submerged. However, it was foreseeable that in some places no extraction could be achieved. In such a case, the country in question and the reason why it was impossible to obtain the sample would be mentioned.

The proposal provoked strong reactions in the global and social media, resulting in the cancellation of the artwork and a wave of vitriol against my practice. My intention behind the piece was clear and simple: it is against colonialism and a denunciation of the pain and destruction it has caused in history among the population, devastating entire cultures and civilisations.

Just this week the British ruling Conservative Party made the decision to fly the Union Flag on Government buildings everyday a “a proud reminder of our history and the ties that bind us”. This is a “history” that has been rewritten through Operation Legacy which saw massacres, rape and torture erased from public records.

But the British Empire is only one example of such plundering and conquest, albeit one of the most forceful, both for the distance it reached and for the genocidal methods applied. This is why ‘Union Flag’ was planned to be the first of a series of performances to be carried out all over the world, with similar actions referencing the Spanish, Portuguese, French, Dutch, American and other empires.

The question of colonialism is a recurring theme in my recent works. It is present in “Black Flag” where the Anarchist flag was planted at the geographic North and South Poles.

The Black Flag at the North Pole ©  Santiago Sierra

The Black Flag at the South Pole ©  Santiago Sierra

Also, the “Three Commandments of Postcolonialism”, which we are currently developing for the Museumsinsel in Berlin.

There are three very clear points: the first is to stop stealing, the second is to give back what was stolen and the third is to compensate the victims. I think this message from Berlin could be extrapolated to any similar circumstance, including Australia. 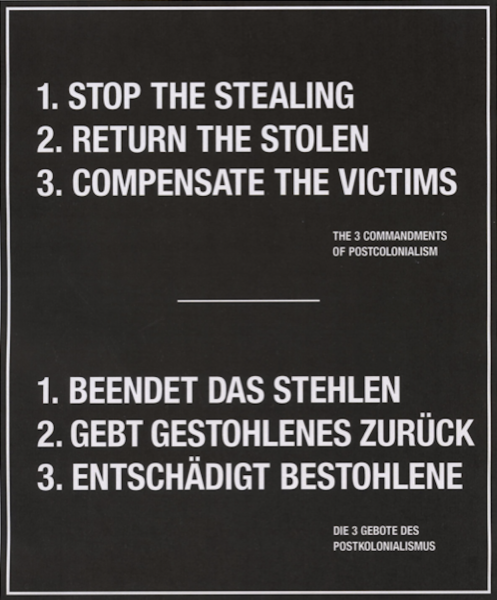 In this case, the use of the British flag is not directed against any particular collective, but rather seeks to reflect on the material on which states and empires are built. In the same way, the use of blood from nationals of 83 different countries and its indiscriminate mixing in the vessel also has a marked expressive effect. All blood is equally red and has the same consistency, regardless of the race or culture of the person supplying it.

Art is extremely powerful and effective for any cause. Imagine what would become of the Pope without St. Peter’s Basilica or politicians without their flags or the symbols of their parties, etc. Everything that art represents has always been used politically and very effectively. This case is no exception. Using the medium of art, using powerful expressive forms to talk about an issue can generate a lot in our society and therefore it is valuable and desirable to make a project of these characteristics.