My mother-in-law found the official luxury mansion and Maserati. Video 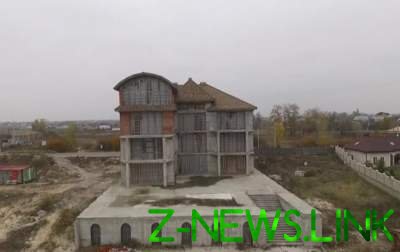 As noted, on the banks of the bypass channel Kiev reservoir at Zachinaeva there are three land plots with a total area of 39 acres, purchased in 2017. Market value of the land here with $2.5 thousand sq. m., which means that the price of plots Zachinaeva should be $97,5 thousand

Near mother-in-law of police officer bought another 36 acres of land on the banks of the Dnieper. Sites were acquired in different years. The market price of purchased parcels is $90 thousand House for them, according to Google Maps began to build in 2012.

According to the Metropolitan architect Ivan Ponomarenko, the cost of the 5-storey box of a house should be about $450 million
Also mother-in-law Naumova were two plots in the village of Rybakovk of the Nikolaev area. On the Black sea coast in 2013, she purchased 40 acres, the total market value should be about $40 million In the property registry, this place is still a house of 40 square meters, but in fact there has already been laid the Foundation for a large building, probably a hotel.

In addition, Tatiana Zachinyaeva in February 2017 became the owner of the Maserati Levante (2016р.in.). This is the only crossover in the line’s luxury brand, Maserati. In the official dealer of such cars cost from 3 million, it’s $110 thousand (with the latest discounts and 2.6 million UAH, or about $98 million). Auto Zachinaeva yet also for sale for $90 thousand Previously on the car were the same number “4444” and a Volkswagen Touareg, recorded on daughter Zachinaeva wife Valentina Naumova. 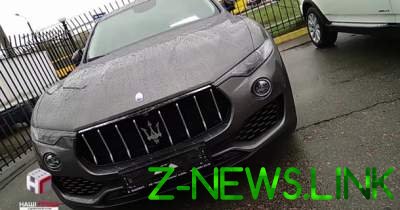 The official income of Tatiana Zachinyaeva over the past 5 years is 10 500 UAH. According to USREOU Zachinaeva is the co-owner of a number of private companies until recently five.

Police Colonel Ivan Naumov until the mid-2000s he worked in law enforcement bodies of Donetsk, and later was transferred to Kiev, and in 2012 received a position in the Vinnytsia region – first head of the Department of public service on fight against economic crimes, April 2014 – the Deputy chief of UMVD of area, later returned to the capital, received the post of the head of Department of material security of the Ministry of interior of Ukraine, and now of the asset management Department of the National police of Ukraine. Income Navumau declares only the salary of 38 thousand per month in 2016.

Wife NuMOV, according to his own declarations, for the last three years – was not working, the only income – one-time 580 000 UAH from the sale of the car in 2015 Valentina Naumova was listed co-owner of several private companies, but one of them did not declared the profits.

According to the latest declarations Naumov, his wife was car Volkswagen Touareg (2011). And Harley-Davidson Vrscf (2009). Now the car is sold instead of purchasing new of the same model, but 2017 V. a car from an authorized dealer is under 1.5 million.

To comment on the status of mother-in-law Ivan Naumov refused, citing the fact that they are not personal.