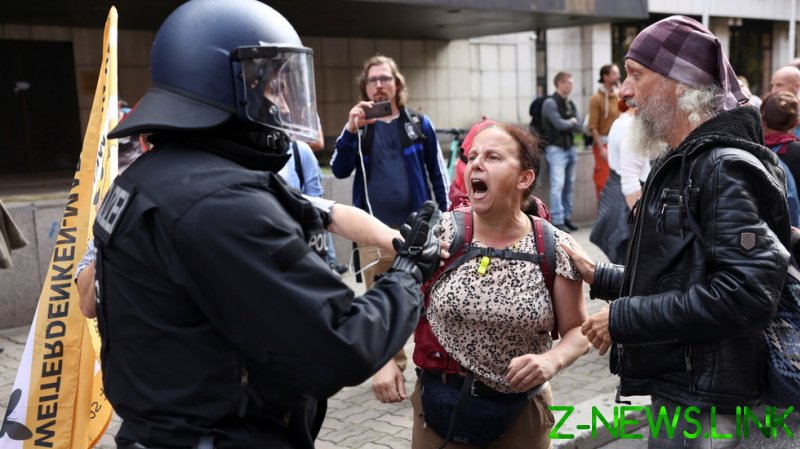 In a video from a rally against coronavirus restrictions in Berlin on Sunday, an officer in full riot gear was filmed grabbing a female demonstrator by the neck with both hands and violently tossing her to the ground to the shock of all those around. The woman didn’t appear to be acting aggressively and was just trying to walk past the policeman.

The clip spurred an internal investigation into “suspected bodily harm” by the Berlin police and angered the UN’s special rapporteur on torture, Nils Melzer, who demanded more information on the indecent. There were also other videos of officers mistreating the protesters, including elderly ones, filmed at the demonstration in the German capital.

“I’m sure my colleagues acted in accordance with the law [during the Sunday’s protest],” Rainer Wendt, who heads the German Police Union, insisted when approached by RT DE.

The rally by the anti-lockdown and anti-vaccination movements, commonly referred to as ‘Lateral Thinkers’ in Germany, was “far from peaceful and violated public order from the start due to not being authorized,” he pointed out.

Wendt dismissed claims that the coronavirus skeptics were being treated hasher by the German officers than any other protesters. For the police, “there’s no difference if a protest is illegal or not… or who takes part in it.” The job of the officers remains the same and it’s “curbing violations,” the union’s head explained.

“My colleagues were under intense pressure in connection with the incident” at the rally in Berlin, he said.

Wendt expressed the belief that the pandemic has generally put the German police in a difficult situation, and during the last two years the force had to get used to being “under a flurry of criticism.”

“Unfortunately, the society is becoming increasingly polarized,” he said, referring to a growing split between those who support the measures aimed at containing the spread of the virus and the Covid-19 skeptics. “And the police find themselves between the two sides that confront each other and are no longer ready for dialogue.”

“We’d like the politicians to contain all parties to this conflict,” the union’s head added.