‘My camera against your baton’: Protesters rally in Paris as Senate debates controversial bill aimed at protecting police (VIDEO) 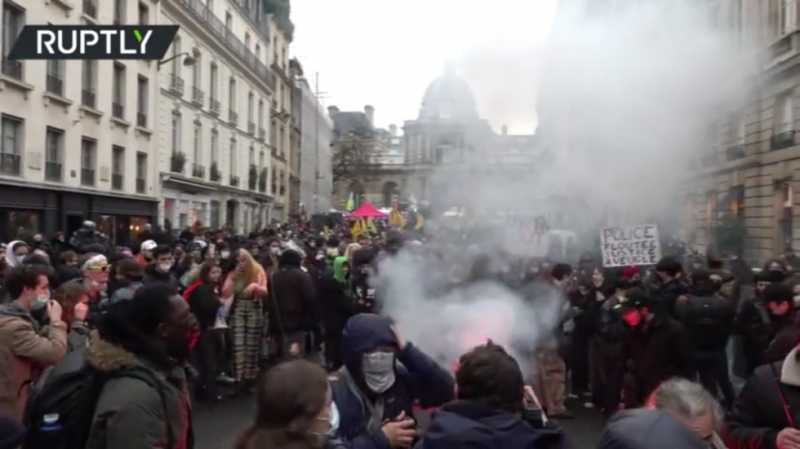 People carried lit flares and placards saying, ‘My camera against your baton.’ They shouted anti-police slogans and demanded the resignation of Interior Minister Gerald Darmanin.

The Global Security Bill, introduced by President Emmanuel Macron’s ruling party last year, would ban the showing of the faces of on-duty police officers “with the aim of damaging their physical or psychological integrity.” The government insists the measure is necessary to protect the police against offenders.

The bill, which would also give police more powers to use CCTV and drone footage, was passed by the lower house of the country’s parliament in November and landed in the French Senate on Tuesday, where it will be debated.

A senator from the Green Party, Esther Benbassa, echoed the same concern at Tuesday’s rally. “If it hadn’t been for these images, we wouldn’t have known a thing about police brutality,” she told the protesters.

The bill has sparked several large-scale protest marches in Paris in the recent past, some of which spiraled into clashes with police.

On Tuesday, Darmanin reiterated that it was aimed at protecting officers during police operations. “The police officer is never the enemy,” the minister said, adding that the legislation would strengthen “the confidence the nation has in its police force.”