Home / WORLD / ‘My body, my choice’: Why haven’t pro-choice advocates and anti-vaccine mandate campaigners realized they are on the same side?

‘My body, my choice’: Why haven’t pro-choice advocates and anti-vaccine mandate campaigners realized they are on the same side? 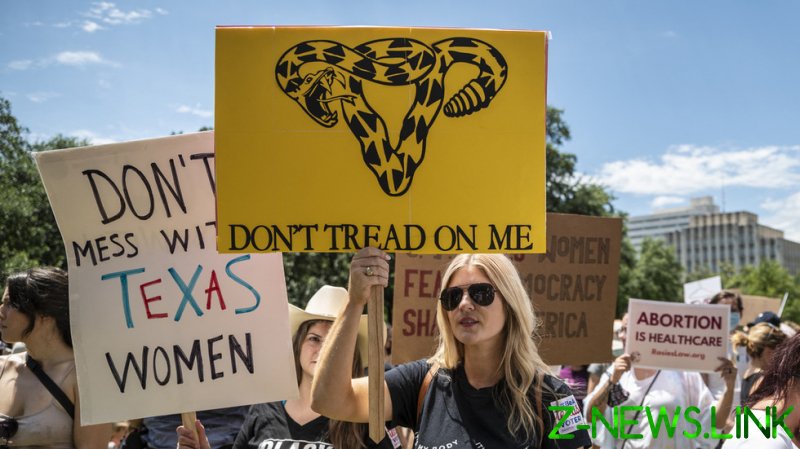 The battle over abortion rights has raged for decades, though it seemed all but won as recently as a month ago, with Roe v. Wade safely in the rearview mirror and no hint of any real legislative upset coming down the track. In May, however, Texas dropped a legislative bomb amid that relative tranquility and announced that almost any abortion carried out more than six weeks after conception – when the fetus’ heartbeat could be detected – was illegal. Higher courts refused to take up the case, and the Supreme Court cancelled its own hearing last week, allowing the law to take effect. Pro-choice activists, needless to say, are livid.

Not only are mothers-to-be prohibited from deciding whether to carry their baby to term before many are even aware they’re pregnant, but the law clashes with Supreme Court rules that bar abortion bans before “fetal viability,” generally defined as 22 to 24 months into pregnancy, and the usual exceptions for cases of rape or incest are not present. The unprecedentedly strict bill even incentivizes private citizens to sue abortion providers or anyone else who assists a woman in obtaining the procedure, and these glorified vultures can make a quick buck stalking their pregnant pals – the law entitles them to a minimum of $10,000 per pregnancy, plus lawyers’ fees.

One has to ask what the utility of allowing such a law to take effect at this time can possibly be. Long the battle cry of the pro-choice movement, “my body, my choice” has more recently been adopted by anti-Covid-lockdown protesters as their own call to arms, a verbal push-back against mandatory vaccinations and the Orwellian ‘health passports’ dangled by governments determined to squelch any last semblance of human rights in their so-called “democracies” and turn citizens into literal “human resources,” to be routinely mined for booster shot profits by large pharmaceutical corporations.

Indeed, the abortion debate appeared to be settled, especially under a Democratic president; the utility of unearthing this particular legislative corpse at this particular point in time seemingly escaped rationality. But perhaps that’s the point. The original ‘My body, my choice’-ers – the pro-choice feminist crusaders whose efforts helped Roe v Wade pass in the first place, allowing women to decide when and if to have children even in the absence of less drastic contraceptive measures – tended to the political Left, a “side” which at least until relatively recently was associated with the Democratic Party.

The anti-lockdown movement may lean toward the pro-life side of the spectrum on the abortion issue, but that’s not its focus. Indeed, dredging up that long-dormant debate was a stroke of evil genius on the part of the ruling class, as it all but guarantees the movement and its participants will remain toxic to self-conscious so-called ‘liberals’ even though there are few things less ‘liberal’ than mandatory inoculation orders – aside from a gag order on any discussion of said inoculation, of course.

It’s no coincidence, then, that the leaders of the Democratic Party have been busy smearing the anti-lockdown contingent as far-right extremists, even though there’s nothing more liberal than demanding freedom of speech, freedom of association, freedom of religion, and the rest of the freedoms guaranteed Americans by the Bill of Rights and ripped away by the busy jaws of what opponents have taken to calling “Covid-1984.” One wouldn’t have to be too conspiratorially minded to think this divide-and-conquer setup is being engineered to keep one “my body, my choice” group focused on attacking the other, never mind how closely the demands of the two groups overlap. They may have an overwhelming amount in common, but they can’t be allowed to recognize that, or else the entire propaganda edifice collapses. Above all, no group can be permitted to recognize its numerical strength, lest it unite with its erstwhile opponents and turn against those determined to pit one against the other.

Both groups would be wise to find common cause in their desire to maintain bodily integrity sooner rather than later. Governments around the world are bearing down on humanity, determined to control and track the earth’s population with digital vaccination certificates – an invention people were mocked as conspiracy theorists for calling attention to just last year, but which now is glistening in the public eye in all its totalitarian glory. Anyone who wants to be vaccinated should be able to get the jab, of course – but not everyone wants it, and even those who’ve received it may balk at the extensive list of supplementary information the WHO’s mock-up health passport demands (or the seemingly endless series of booster shots recently unveiled as the future for those who’ve received the Pfizer and Moderna vaccines). Indeed, 72% of those not currently vaccinated told the Washington Post earlier this month that they’d rather quit their job than take a mandatory vaccination, should their workplace demand it.

Meanwhile, those concerned about the rollback of abortion rights in the US must surely be aware that a government that requires biometric vaccine ID cards for its citizens to so much as venture into a supermarket is far less likely to readopt the Roe v. Wade standard regarding reproductive rights than a government that allows people to move about as they please. Fascism in one area begets fascism elsewhere. It’s in everyone’s best interest to prevent it from taking root in our own bodies.