Home / WORLD / Muslims are strangely obsessed with cartoons, all while there are very real crimes over which they should be angry at France

Muslims are strangely obsessed with cartoons, all while there are very real crimes over which they should be angry at France 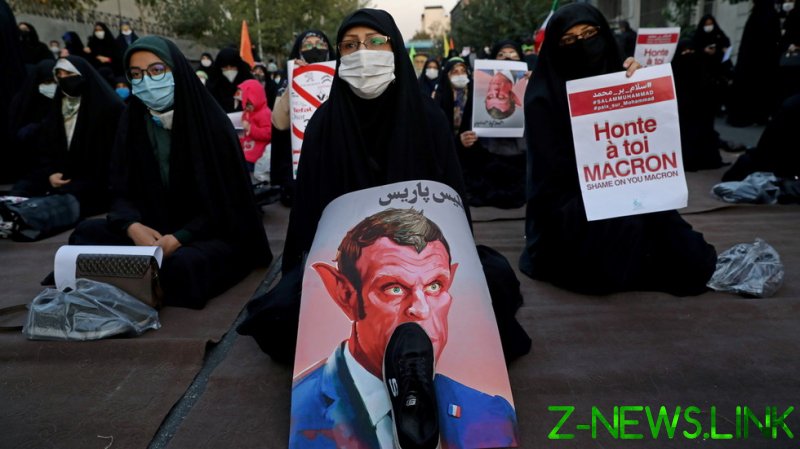 I honestly don’t know what to make of France. Not the people –nor the country itself– but the foreign policy inclinations of its respective governments, including those under the leadership of Emmanuel Macron. As a former anti-terrorism cop recently told RT, France may have brought Jihad on itself – in more ways than one.

In Libya, for example, France and its NATO cohorts (in a bombing campaign unofficially orchestrated by the US) provided air cover to al-Qaeda-linked extremists to topple Muammar Gaddafi. Those extremists were the very same militants that US troops had been fighting against for years in Iraq, and almost undoubtedly the same militants that France was supposedly fighting against in Mali.

The decision to destroy Libya did nothing if not spur the spread of Islamic extremism across the African continent and directly exacerbate a looming refugee crisis. Weapons, extremism and slavery began being exported out of what had been transformed into a failed state – all thanks to France. According to some reports, during its bombing campaign, NATO forces also bombed and rendered ineffective a major water supply infrastructure which provided water to 70 percent of Libya’s population. One would think the bombing of 70 percent of the water supply of a Muslim-majority nation should surely rouse at least one Muslim protest, but I digress.

When the French government isn’t bombing Muslim-majority nations, it’s wreaking economic havoc on these states through the use of the France-backed CFA (French Colonies of Africa) franc. As Italy’s former deputy minister and current minister of foreign affairs said “France is one of those countries that, by printing money for 14 African states, prevent their economic development and contribute to the fact that the refugees leave and then die in the sea or arrive on our coasts.”

France has a long and unappreciated history of undermining Islamic civilizations, from Syria to Algeria. During the war of Algerian independence, French soldiers committed a host of atrocities, including torture. 300,000 Algerians died as a result of the conflict. Barely spoken about in the mainstream media, it remains a controversial aspect of France’s bloody history.

This is all barely scratching the surface. An entire book would barely do justice to this topic, yet it’s one I hoped Western media had paid a greater deal of attention to.

Equally frustrating, however, is the Muslim world’s indifferent reaction to these pertinent facts. Where is the Muslim world’s condemnation of France’s very real participation in the genocidal mayhem being inflicted on our Muslim brothers and sisters in Yemen? Where is the unification, the protests and the rallying each time an innocent Muslim is killed due to France’s longstanding imperialist ambitions?

You throw a cartoon in the mix and it’s a different kettle of fish. Add in a president stating that he won’t denounce said cartoons, the equation suddenly results in the following: widespread calls to boycott French products with Qatar and Kuwait actively removing French products from their stores; defamatory remarks from the Turkish president against Macron directly; protests in Israel, Gaza, Bangladesh, Iran, Afghanistan, and Jordan, to name a few; the burning of French flags as well as condemnation from major newspapers until a fanatical lunatic decides to publicly behead innocent French Church-goers, as if it’s the year 629 AD.

One Iranian newspaper even called Macron the “Demon of Paris.” Oh – so now he is the demon of Paris. Not when he actively bombed Iran’s closest ally in the Middle East in flagrant violation of international law. Not when he continued to sell arms to Saudi Arabia to commit an endless supply of war crimes in Yemen, another supposed Iranian ally.

Except that it’s not. Not according to the Western ideals of free speech – the West being where these drawings took place. As in, you can’t exact Islamic laws on non-Muslims who reside in non-Muslim nations. Even if you agree with Quiayum, you would still have to grapple with the fact that there is no legal, logical or moral requirement for French people to abide by archaic Muslim values.

Supposing I did agree with Quaiyum; how can it be that the depiction of a prophet is higher up on the list of things that enrage Muslim people in comparison to the bombing of our people, the incessant proxy wars plaguing our regions, the backing and funding of terror groups for the pursuit of unstated geopolitical aims, or the mass looting of our resources and the hampering of our countries’ progress?

Real Islamophobia is more than just a sharply-drawn middle finger to the Muslim community from a handful of satirical cartoonists. I’d prefer to think that the God of the Muslim world would not concern himself with such petty, imaginary crimes. Not when we have plenty of very real and serious war crimes and crimes against humanity that we could actually protest about with the aim of exacting real change to benefit some of the most vulnerable people in this world.

And, if you’re offended by this article, I can’t help but notice you’ve essentially proved my point.