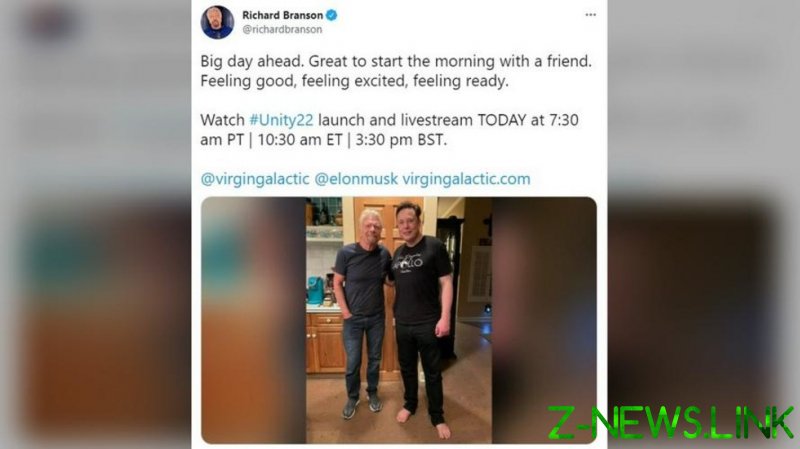 The British daredevil entrepreneur will be among the six people on board the air-launched plane VSS Unity, which is scheduled to make its first fully crewed suborbital trip on Sunday. Musk, the head of spacecraft producer SpaceX and a space exploration enthusiast, wished Branson all the best.

The billionaire appreciated the words of encouragement hours before the launch. “Thanks for being so typically supportive and such a good friend, Elon. Great to be opening up space for all,” he tweeted in response, to which Musk said “Godspeed!”

The two met later in the day at Virgin Galactic’s Spaceport America in New Mexico.

The exchange contrasts sharply with barbs fired at Branson’s space project by Jeff Bezos’ Blue Origin. The company, which is aimed at the same emerging market of rich tourists yearning for a new experience, dunked on the VSS Unity, implying it was not really a spaceship and comparing it unfavorably to its own New Shepard capsule.

The salty remark may be due to Branson’s decision to schedule his launch just nine days before the first crewed test by Blue Origin. Some observers have dubbed the competition a “billionaire space race,” though the British businessman denies one is underway.