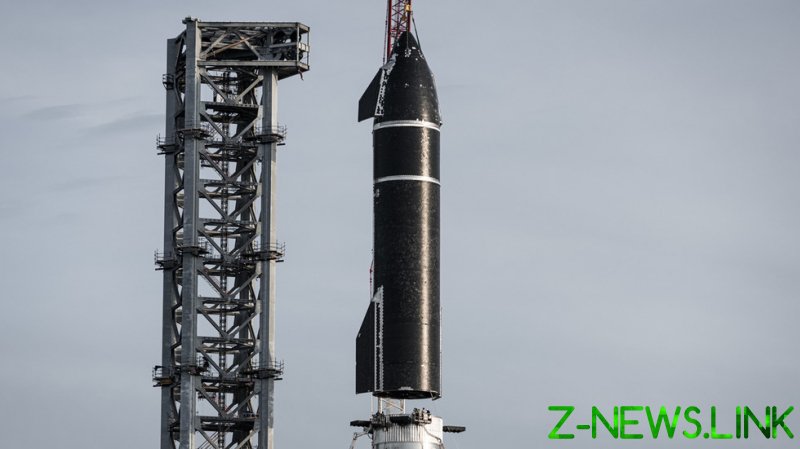 SpaceX CEO Elon Musk has hailed the progress made in the testing of the robotic mechanism at the SpaceX launch pad in southern Texas, which was built to catch returning rockets and spacecraft.

‘Super Heavy’ is the dedicated launch vehicle for ‘Starship’, SpaceX’s spacecraft designed for eventual Moon and Mars missions. The launch system is intended to make delivering crews and large cargoes into deep space cheaper than ever, in part by making both of its elements fully recoverable.

In a Twitter post on Sunday, Musk showed off the gigantic robotic mechanism that will hopefully allow rockets and spaceships to be caught mid-air when they return home. The launch/catch tower, dubbed ‘Mechazilla’ by the space entrepreneur, is currently undergoing tests at SpaceX’s Boca Chica site in Texas.

In August of last year, Musk replied to a Twitter post of a 3D animation of how the 134-meter (440-foot) high ‘robot chopstick’ arm would work with a Super Heavy rocket, saying it was “pretty close.” Engineers have been testing and calibrating its hydraulic actuators and other equipment since early January.

The first orbital test flight of the transplanetary launch system was expected to take place in January or February, but has been delayed until at least March due to ongoing evaluation by the US Federal Aviation Administration (FAA).

The flight plan, however, does not include the recovery of either the Super Heavy B4 or the Starship S20. They are scheduled to make splashdowns in the Gulf of Mexico and the Pacific Ocean respectively, after completing their parts of the test mission.

SpaceX is famous for introducing cost-cutting reusability features in its less-powerful launch systems, most notably routinely recovering the first stages of the Falcon 9. However, the approach used by the company now involves landing used boosters on a robotic floating platform or a landing pad, rather than catching them in flight with an arm.