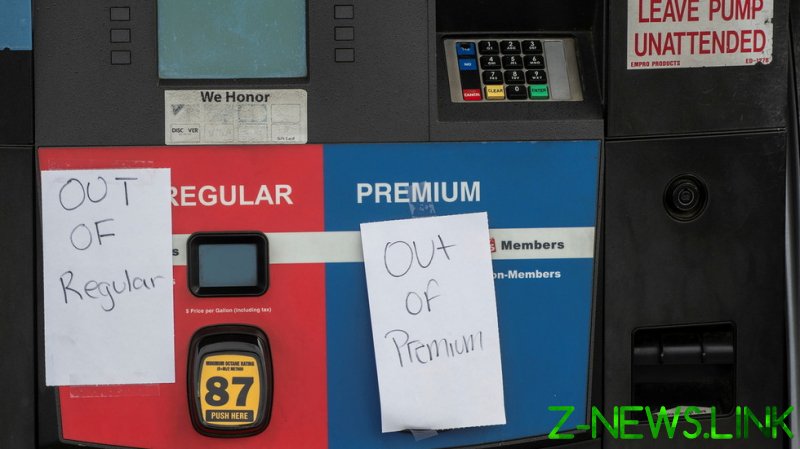 Virginia and Florida declared a state of emergency on Tuesday, following North Carolina’s declaration the day before, as the disruption in pipeline operations led to over 1,000 gas stations across a dozen states to run out of fuel, according to S&P’s Oil Price Information Service.

As of Tuesday afternoon, 27% of stations in North Carolina’s Greenville/Spartanburg/Anderson metro area were dry, according to GasBuddy, an app helping motorists find deals at the pump. So were 31% of pumps in Raleigh and 29% in Charlotte. Atlanta, Georgia reported a 30% outage as well. GasBuddy crashed repeatedly on Tuesday due to surging demand.

One would not know this from New York Times reporting, however. The newspaper claimed that since the pipeline’s shutdown due to a ransomware attack, “there have been no long lines or major price hikes for gas.”

Energy Secretary Jennifer Granholm insisted the East Coast was not facing a “gasoline shortage” but rather a “supply crunch.”

“We know that we have gasoline; we just have to get it to the right places,” Granholm told reporters at the White House on Tuesday. She said there was “no cause for hoarding gasoline” and compared it to “hoarding toilet paper at the beginning of the pandemic.”

The Colonial Pipeline will be “substantially operational by the end of this week and over the weekend,” Granholm said. Colonial said on Sunday that it would bring the system back online “only when we believe it is safe to do so” and with approval of federal regulators.

Citing a shipper bulletin, the American Automobile Association (AAA) reported that Citgo has run out of premium reformulated fuel at its Fairfax, Virginia terminal, while the Richmond one was out of unleaded regular.

It wasn’t just motorists struggling, either. American Airlines has made changes to two flights originating from Charlotte due to shortages, forcing passengers bound for Hawaii to change planes in Dallas, and those en route to London to make a refueling stop in Boston. Southwest and United began carrying extra fuel on flights to Nashville and Baltimore, in case they ran into shortages.

A ransomware attack on Friday forced Colonial to shut down a 5,500-mile carrying over 100 million gallons per day from Texas all the way to New York. The FBI has blamed ‘DarkSide,’ a group of criminal hackers the US corporate media have accused of being ‘Russian-speaking.’ The group did not admit to the attack, but issued a statement on Monday insisting they were “apolitical” and just out to “make money.”

In an effort to get fuel from the refineries in Texas to customers across the southeast US, the Department of Transportation’s trucking regulator, Federal Motor Carrier Safety Administration, has declared a regional emergency in 17 states and DC.