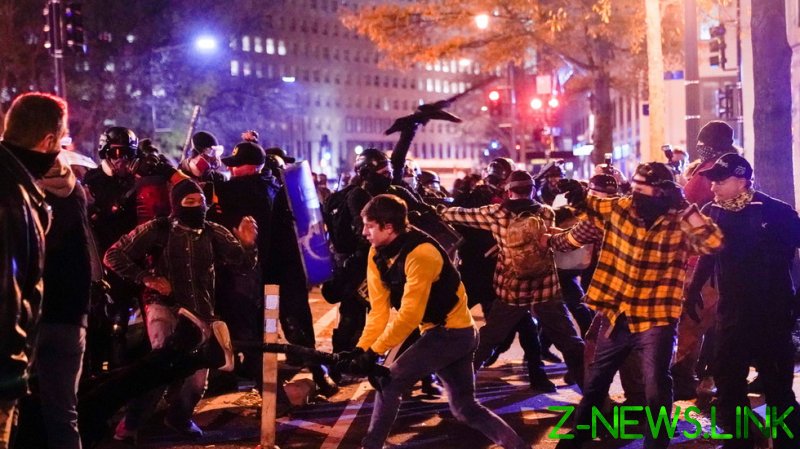 Thousands of supporters of President Donald Trump descended on Washington on Saturday for a massive MAGA rally that featured a volley of conservative speakers addressing the agitated crowd, who believes the election was “stolen” from them, and accuses the Republican Party of “betrayal.”

READ MORE: Biden ‘will be removed one way or another’: Alex Jones, Michael Flynn speak at pro-Trump march as rival protesters clash (VIDEOS)

Despite heated chants like “destroy the GOP!” the event was mostly peacefully, as DC police managed to keep counter-protesters away, with lines of cops on bicycles and in riot gear blocking off groups from interacting.

However, as night fell, the sides splintered into smaller groups and began roaming the streets of downtown Washington and picking fights with their rivals, pepper-spraying each other, and getting pepper-sprayed by the cops.

One person, apparently from the Proud Boys side, was stabbed, with videos shared online showing a right-wing group ganging up on a lone knife-wielding black-clad man.

Other footage showed police retreating under a barrage of bottles, bricks, and other projectiles from an Antifa mob who apparently tried to seize control of the BLM plaza.

Multiple confrontations were captured on film, with clashes and fireworks flying both ways.

Authorities have yet to release the tally of injuries and arrests, but Fox said there were at least two stabbings, and NBC news reported four stabbing victims and multiple arrests during the chaotic night.

Meanwhile, on the other side of the country in Washington state, at least one person was shot and injured, allegedly by a Proud Boys member, amid smaller-scale clashes between the same right- and left-wing groups at Washington’s Capitol campus in Olympia.