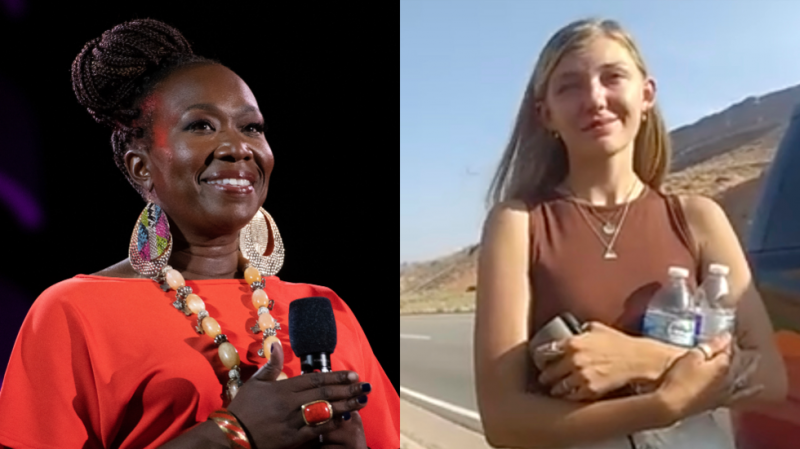 Authorities believe that a body found in Grand Teton National Park on Sunday is that of Gabby Petito, a social media personality who had been reported missing a week earlier. Petito’s fiance Brian Laundrie, who the 22-year-old vlogger had been traveling with and who returned home in the couple’s van alone, is currently missing, and is being pursued by law enforcement.

The case has received considerable media attention, and MSNBC host Joy Reid isn’t happy about this.

“Now it goes without saying that no family should ever have to endure that kind of pain, and the Petito family certainly deserve answers and justice,” she opined on Monday night’s episode of ‘The ReidOut’. “But the way this story has captivated the nation has many wondering, why not the same media attention when people of color go missing?”

However, few would consider ‘violent crime victims’ to be ‘privileged’, and Reid was slated online for her comments.

“Just say you hate white women already,” conservative reporter Cassandra Fairbanks tweeted. “The people who spammed us with wall to wall George Floyd are seriously angry that people care about a murdered woman.”

Reid then cited research from the Black and Missing Foundation showing that non-white missing persons are more commonly labeled as runaways or criminals by the media. However, commenters pointed out that Reid herself has done nothing to cover their cases and dispel the apparent stereotype, nor does she focus on the black victims of violent crime in America’s cities.

Reid is not the only pundit to bring race into the Petito story. Daily Beast editor Molly Jong-Fast penned an article on Monday lambasting the media for failing to cover the 710 indigenous people, mostly girls, who went missing in the same area as Petito over the last decade. While the statistics are shocking, and true, Jong-Fast doesn’t appear to have reported on their disappearances until now either

Reid, however, has made headlines for herself on multiple occasions as of late, first for a high-profile spat with rapper Nicki Minaj over Covid-19 vaccines and their allegedly testicle-swellling side effects, and second for accusing Republicans of deliberately spreading the virus as part of their “death cult.” Last month, she also joined in a chorus of other media voices in comparing American conservatives to the Taliban, the hardline Islamist militant group that had just seized power in Afghanistan.