Home / WORLD / MSNBC claims jump in US inflation is a ‘GOOD THING’, actually

MSNBC claims jump in US inflation is a ‘GOOD THING’, actually 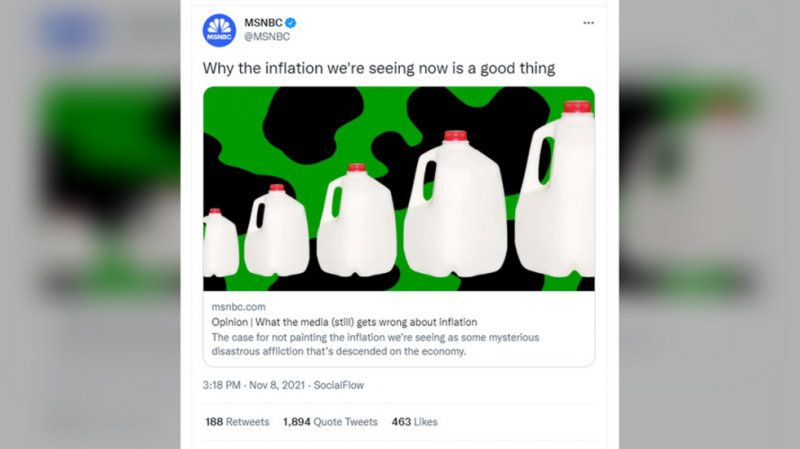 The network posted a Twitter message on Monday to promote an article on rising prices by saying, “Why the inflation we’re now seeing is a good thing.” The article was an opinion piece asserting that inflation fears are being overblown by other media outlets, including CNN, and that rising prices reflect a strong economy.

With inflation surging at the highest rate in 13 years, MSNBC’s positive spin on the issue might be comforting to the Biden administration, which has tried to downplay concern over rising prices as it also grapples with immigration and supply-chain crises. However, the outlet’s tweet was quickly ratioed – and was later deleted – as observers argued that household budgets are being wrecked by soaring costs for such necessities as food and fuel.

Other observers, such as a Twitter pundit who goes by the name Rudy Havenstein, pointed out that the MSNBC claim was part of a progression of explanations used by policy makers to escape blame for the crisis. The spins have gone from “there is no inflation” to “inflation is transitory” to “inflation is good,” he said.

Former congressional candidate Barrington Martin II, a Georgia Democrat, suggested that MSNBC’s absurd claim reflected a larger issue. “Can you see now that all of media is compromised?” he asked.

Software engineer Billy Markus, co-creator of Dogecoin, scolded MSNBC for claiming inflation is a “good thing,” saying, “This headline is bad, and you should feel bad.”