Home / WORLD / MSM’s narrative about the murderous Capitol mob has collapsed, but don’t let that get in the way of a good political lynching

MSM’s narrative about the murderous Capitol mob has collapsed, but don’t let that get in the way of a good political lynching 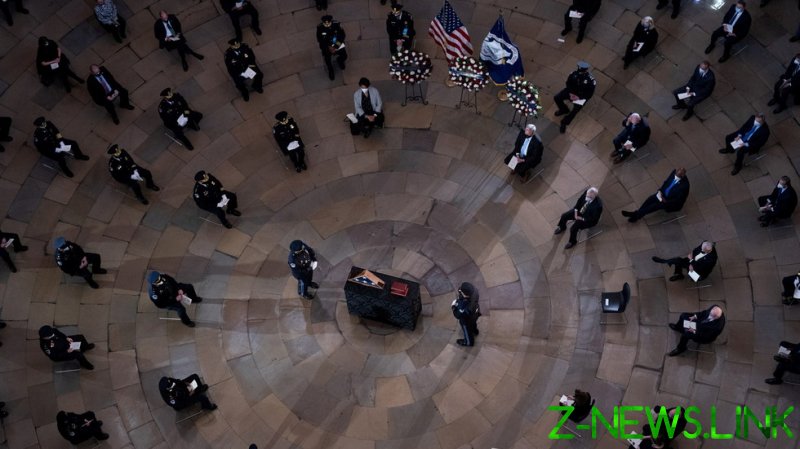 I’m reminded of  the media-speak popularized during the Trump era – lightly used words or phrases that became ubiquitous in the talking points, like “violating norms” – especially the term “debunked.” In the eyes of MSM and their controllers, Trump was a president who needed to be debunked thousands of times. Whether it was about the size of his Inauguration Day crowd, the animal-like savagery of MS-13 gang-bangers or the fact that Haiti is “a s**thole”, any Trump claim had to be debunked, false or not.

When an obnoxious loudmouth constantly blurts out things that lift the skirt on the ruling class’ treachery, his voice must be discredited. And even if just part of his story can be attacked, the rest will be forgotten. It’s like a Jenga game where all the pieces automatically fall down when one is removed.

But the same standard doesn’t apply to the media’s own story lines. No matter how many times MSM and establishment politicians are exposed as liars — from the MLK bust in the Oval Office to the Russia collusion hoax — the people are supposed to keep believing the gist of their arguments. The Jenga tower can be levitating with entire floors missing, but the con artists insist that it’s still standing.

We’re seeing it again in Trump’s second Senate impeachment trial. Giant holes have been blown in the MSM-DNC narrative about the January 6 “insurrection” at the US Capitol, but that’s not supposed to matter. For instance, when lead House impeachment manager Jamie Raskin (D-Maryland) got caught lying on Wednesday about the content of an alleged telephone call between Trump and a Republican senator during the Capitol riot, he admitted that his claim was false and shrugged it off. “This is much ado about nothing because it’s not critical in any way to our case,” he said.

Never mind that the point was apparently considered important enough to submit as evidence. Raskin was essentially allowed to wriggle out as if he said, “The fact that we’re lying about this doesn’t reflect whatsoever on the veracity of anything else we’re telling you.”

A far bigger and more central piece of the impeachment Jenga tower shouldn’t be sloughed off so easily. In fact, Capitol Police officer Brian Sicknick is so central to the narrative that his cremated remains were displayed in honor at the Capitol Rotunda to remind everyone of the viciousness of the alleged Trump domestic-terrorism army.

The tale of the brutal Trump mob is always punctuated with the fact that five people were “killed” during the riot, er, “white-supremacist insurrection.” One of those people was Ashli Babbitt, one of the rioters, who was fatally shot by a law enforcement officer. Three others were election-fraud protesters who died from health crises – a heart attack, a stroke and an unidentified medical emergency – during the January 6 demonstration and riot.

The talking heads who wish Trump supporters dead in every other case are counting Trump supporters in the death toll from an incident perpetrated primarily by Trump supporters. It’s as if they’re leading a story on a hostage crisis by saying that 30 people were killed without mentioning that 25 of those were hostage takers, including 22 who died of food poisoning.

Therefore, it’s easy to see why Sicknick is so important to the story. He’s the one alleged victim who wasn’t on Team Trump that day. MSM and Democrat politicians told us over and over that the officer died from being bludgeoned in the head with a fire extinguisher, even though Capitol Police’s official statement was only that he “passed away due to injuries sustained while on duty.”

CNN’s Wolf Blitzer, Anderson “CIA” Cooper and other MSM hosts ignored the Sicknick family’s request to not make the officer’s death a political issue. They portrayed it as a murder without any such determination by investigators. No one has been arrested in connection with Sicknick’s death, and no murder case has been built so far.

But the Sicknick story has crumbled in recent days with the revelation that medical examiners didn’t find any indication that the officer sustained any blunt force trauma. Investigators are reportedly considering a theory that Sicknick became ill after coming in contact with a chemical irritant, such as pepper spray, that was deployed in the crowd.

The vast majority of Americans haven’t heard about this gigantic wrinkle in the Sicknick story because the media, predictably, hasn’t blasted out corrections of their false reporting. They’ve adopted more careful storytelling about the officer’s death, with the fire-extinguisher bit missing.

Also obscured is the wrinkle that Sicknick communicated with his family after the riot. Ken Sicknick reportedly said his brother sent him a text hours after the riot, saying, “I got pepper-sprayed twice,” and that he was in good shape. The next day, the family was informed that Sicknick was in critical condition, on a ventilator.

Without issuing a correction on any of its false stories with the fire-extinguisher tale, CNN reported the fact that Sicknick died of something other than blunt force trauma. In its first article acknowledging that reality, the network immediately transitioned from the Sicknick investigation to background about other officers being injured by rioters. It was like saying, “our central claim wasn’t true, but that doesn’t change the fact that the Trump mob was vicious.”

Daily Dot writer Mikael Thalen argued the propagandists’ case, saying mainstream outlets didn’t lie to fit a narrative. There was just a “communication breakdown” between sources and reporters. He conceded that the facts of Sicknick’s death are important, but concluded that those details have no bearing on the fact that “thousands of people, egged on by the most powerful man in the world, attempted to violently overthrow the democratic process.”

It’s the Jamie Raskin response all over again. Never mind the falsehoods that we’ve been telling you. None of that stuff we said over and over had anything to do with our central point that Trump incited an insurrection. And don’t let the fact that we’ve been telling you falsehoods cause you to question our credibility. The house of cards, the Jenga tower, still stands strong.

But how many pieces have to be debunked before we can call the project debunked?