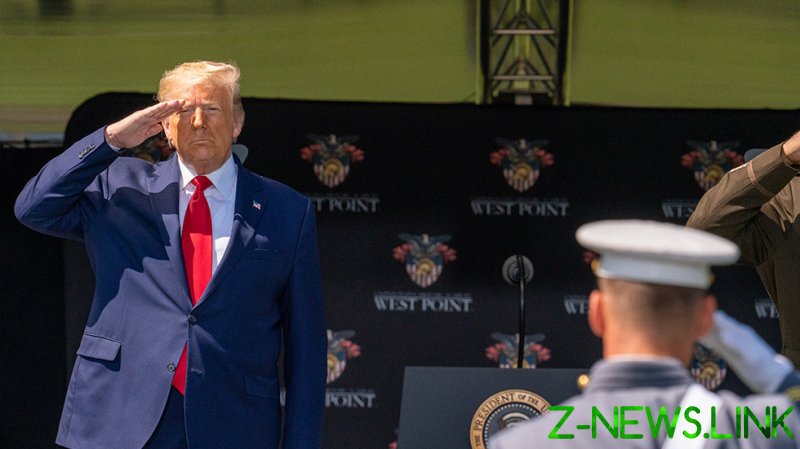 Someone should tell the New York Times, CNN and other mainstream media outlets that soldiers don’t actually like getting killed or maimed for no good reason. Nor do they like generals and presidents who spill their blood in vain.

Alas, ignorance of these obvious truths probably isn’t the issue. This is likely just another case of the biggest names in news pretending to not get the point so they can take the rest of us along for a ride in their confidence game of alternative reality.

The latest example is the New York Times spinning President Donald Trump’s critique this week of Pentagon leadership and the military industrial complex as disrespect for the military at large. “Trump has lost the right and authority to be commander in chief,”the Times quoted retired US Marines General Anthony Zinni as saying. Zinni cited Trump’s alleged “despicable comments” about the nation’s war dead – reported last week by The Atlantic, citing anonymous sources – as one of the reasons Trump “must go.”

Never mind that Trump and all on-the-record administration sources denied The Atlantic’s report. The Times couldn’t resist when the pieces seemed to fit so well together for the military’s latest propaganda campaign against Trump. First the president disses the troops, calling them “losers” and “suckers,” then he has the temerity to say Pentagon leaders want to fight wars to keep defense contractors happy.

Except the pieces don’t fit. The many people who occupy so-called boots on the ground don’t have the same interests as the few people who send them to war. In fact, combat troops are given reason to hate the generals who send them to die when there’s not a legitimate national security reason for the war they’re fighting. And the US has fought a long line of wars that didn’t serve the nation’s national security interests. Even when a war is justified, the interests of top brass and front-line soldiers often clash.

Remember that great 1967 war movie, ‘The Dirty Dozen’? A group of 12 soldiers who were condemned to long prison sentences or execution in military prison for their crimes were sent on a 1944 suicide mission to kill high-ranking German officers at a heavily defended chateau far behind enemy lines. After succeeding in the mission and escaping the Germans, the lone surviving convict, played by tough-guy actor Charles Bronson, told the mission leader, “Killing generals could get to be a habit with me.”

So no, New York Times, speaking out against ill-advised wars does not equal bashing the military. And sorry, General Zinni, but generals, defense contractors and their media mouthpieces don’t get to decide who has the “right and authority” to be commander in chief. The voters decided that already, and they expressed clearly that they don’t want senseless and endless wars and foreign interventions.

The Times cited General James McConville, the Army’s chief of staff, as saying Pentagon leaders would only recommend sending troops to combat “when it’s required for national security and a last resort.” And no, it wasn’t a comedy skit. What’s the last US war or combat intervention that measured up to that standard? Let’s just say the late Bronson, who died in 2003 at the age of 81, was a young man the last time that happened.

CNN tried a similar ploy on Sunday, while trying to sell the “losers” and “suckers” story in an interview with US Veterans Affairs Secretary Robert Wilkie. Host Dana Bash said the allegations fit a “pattern of public statements” by the president because Trump called US Senator John McCain a “loser” in 2015 and said McCain shouldn’t be considered a hero for being captured in the Vietnam War. She repeatedly suggested to Wilkie, who didn’t take the bait, that Trump’s attacks on McCain, who died in 2018, showed disrespect for the troops.

Apparently, this follows the same line of propagandist thought which told us that saying there are rapists among the illegal aliens entering the US from Mexico – which is undeniably true – equals saying all Mexicans are rapists. In CNN land, a bad word about McCain is a bad word about all soldiers.

McCain was a warmonger who didn’t mind getting US troops killed or backing terrorist groups in Syria. If he had his way, many more GIs would be dead or disabled, because the intervention in Syria would have been escalated and the US might be at war with Iran. Soldiers wouldn’t want their lives wasted in such conflicts.

All wars are hard on the people who have to fight them, but senseless wars are spirit-crushing. An average of about 17 veterans commit suicide each day in the US, according to Veterans Administration data. Veterans account for 11 percent of the US adult population but more than 18 percent of suicides.

The media’s deceiving technique of trying to pretend that ruling-class chieftains and front-line grunts are in the same boat reflects a broader campaign of top-down revolution against populism. The military is just one of several pro-Trump segments of the population that must be turned against the president. Other pro-Trump segments, such as police, are demonized and attacked.

Trump has managed to keep the US out of new wars and has drawn down deployments to Iraq, Syria and Afghanistan – despite Pentagon opposition. His rival, Democrat presidential nominee Joe Biden, can be expected to rev up the war machine if he takes charge. His foreign policy adviser, Antony Blinken, lamented in a May interview with CBS News that Trump had given up US “leverage” in Syria.

Trump also has turned around the VA hospital system, ending decades of neglect that left many veterans to die on waiting lists.

Like past campaigns to oust Trump, the notion that he’s not sufficiently devoted to the troops might be a tough sell. No matter how good their words may sound, the people who promote endless wars without clear objectives aren’t true supporters of the rank and file.