Home / WORLD / MSM loves to blow up any tiny problem in China into an existential crisis. No, the country’s not facing a ‘Lehman Brothers moment’

MSM loves to blow up any tiny problem in China into an existential crisis. No, the country’s not facing a ‘Lehman Brothers moment’ 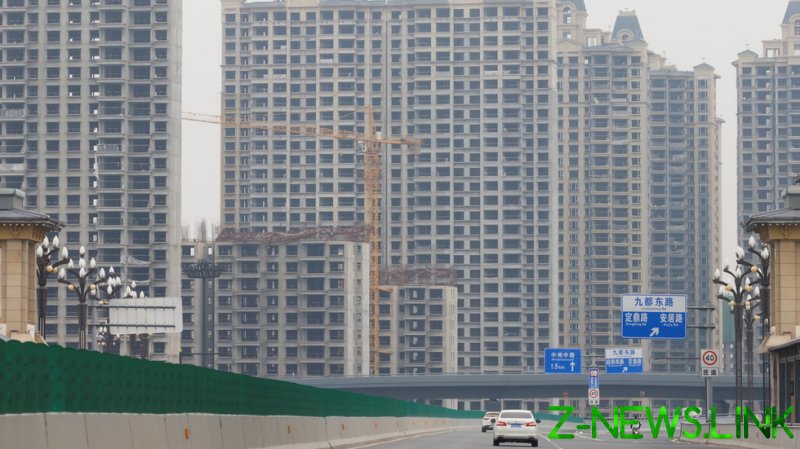 The Evergrande Group, China’s second largest property developer, is seemingly on the verge of bankruptcy. It’s one of the biggest in the world, and a Fortune 500 company. However, it finds itself swamped in over $300 billion of liabilities and is struggling to repay its debts, sending it tumbling towards a risk of default and insolvency.

Its shares are crashing, and predictably its pending fate is sending shockwaves and fears across markets worldwide, something the mainstream media lap up because they always love a good scare story about China, not least its economy.

As a result, there has been a tsunami of articles branding the situation as China’s “Lehman Brothers Moment” – a reference to when the famous US financial firm of that name toppled in 2008 and set off the global financial crisis. Now, inevitably, commentators are predicting the same thing, pointing out that Evergrande’s demise could rattle not just China’s own economy, but go far beyond that. A number of prominent western financial institutions have bought the company’s bonds, and would take a hit if the firm can’t meet its obligations in the coming weeks. Many speculate as to whether the Chinese government might bail Evergrande out.

But let’s be clear: Evergrande is not another Lehman Brothers in the making. One of the reasons why there is such an excessive circus around this is not just because of legitimate fears regarding the fate of this firm, but that in the media discourse of China there is a cult of abject hysteria and a lust for negativity. Western media likes nothing better than to seize on anything remotely bad pertaining to this country, hyping it into excessively dramatic and apocalyptic news.

In the process, it frequently “cries wolf” and gets things wrong time and time again. It’s a news cycle premised on a “hoping for the worst” mindset, fueled by a strange mix of orientalist, and plain ideological, bias.

Every event within China is reported with the worst possible outcome. For example, China was facing an apparent nuclear disaster just months ago. The initial outbreak of Covid-19 was framed as China’s “Chernobyl moment” and a threat to the political system itself in 2020, as were the Hong Kong protests the previous year. The Three Gorges Dam is always apparently “set to collapse”. The list goes on and on. We all know there’s a certain author who over 20 years ago penned a book titled “The Coming Collapse of China” – and in some ways his thesis is reflective of this “doomcasting” approach to China, which seems to stem from the inherent belief that the country’s political and economic system is inevitably going to fail, or, rather, the fervent hope that it does.

This unhelpful media environment creates white noise and a distraction for what is actually happening, and so it is with Evergrande. The firm may be on its knees, but there is a calculated reason why Beijing, so far at least, is allowing it to go to the brink. It’s both for economic and political reasons – there’s no lack of oversight or negligence here.

As a matter of fact, Xi Jinping’s rule has taken a much harder line against what is perceived to be unsustainable, debt fuelled growth. He dislikes firms bingeing on extreme amounts of debt to achieve short-term growth goals which have no sustainability. It is this kind of uncontrolled spending which was at the heart of Gordon Chang’s 2000 thesis; the belief that financial unsustainability would bring down the system.

But China has in fact been steering away from that, and the emphasis under Xi has been to control the supply side, limit excessive lending and produce economic growth which is lower, but nonetheless more organic and sustainable. When the Covid crisis hit China’s economy last year, it noticeably avoided the mega stimulus inputs the US and UK resorted to.

This economic strategy is one of the reasons why under Xi’s rule China’s annual growth has been hauled down from about 10% to 6%, precisely because going overboard is dangerous. Part of this strategy has been to send out a warning to companies that if you build your business in an unsustainable way and go under, “We’re not saving you and we will let you fail”. Hence the number of defaulting companies in China has increased. It’s to force business to be more efficient and thus to create a more productive, better structured economy.

But the question still remains, will Evergrande go under and produce a financial crisis? Again, no, or at least not in the way it is expected to. For the time being, the Chinese government is hanging Evergrande out to dry in order to send a political warning to others: that no firm is too big to fail and political intervention is not guaranteed.

Another theory is that it is prepared to let Evergrande sink because it does not want the country’s real-estate market to overheat, for property and asset prices to escape affordability; a potential real-estate bubble has been another potential pitfall for China’s growth. Thus, for a multitude of carefully considered reasons, Beijing is withholding its intervention as major economic consequences stem from it.

That does not mean that China’s government will do nothing. Its financial system does not operate in the way those in the West do. All of its major banks are state owned. The government can impose its own controls and rules as it sees fit and simply “defy economic gravity” – precisely why theses of its collapse have been so frequently wrong.

The government may let the firm itself die, but step in to pay off its creditors and investors, because in no circumstances does China want to be branded responsible for a global financial crisis or meltdown, not least in this new era of scapegoating Beijing for everything. There are many solutions to this crisis, but China has seemingly made a political decision that the status quo cannot continue; firms fuelling themselves on debt like this cannot go on as normal without serious reform.

In this case, the mainstream media do as they always do, and doom-monger about China. There is nothing relished more, hoped or anticipated for than a crisis which fuels people’s ideological wishes that something is about to change China’s political status quo.

Evergrande is just the latest subject of this misplaced and abject hysteria. Going beyond the headlines, China wants to end an economic growth trajectory fuelled upon nothing but debt, and that’s what it is doing. Even if by some miracle Evergrande gets out of this mess, Xi Jinping has some tough lessons for it. It’s in his political interest to make the firm feel pain, for the sustainable growth of China as a whole.