Home / WORLD / Mother, may I? Americans have lost their spines if they need Fauci’s blessing to gather for the holidays

Mother, may I? Americans have lost their spines if they need Fauci’s blessing to gather for the holidays 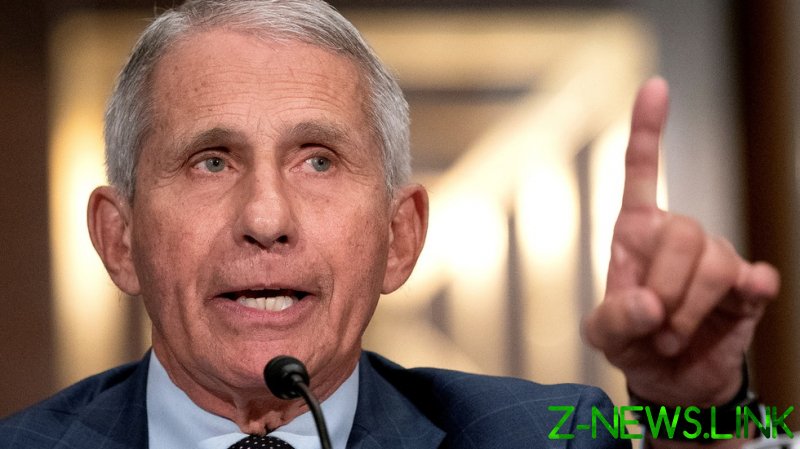 How thoughtful of him! But the good doctor didn’t give his approval unbidden – it was Raddatz, sporting a furrowed brow, who solicited his opinion about whether Americans would be permitted to see their families. Who, besides those TV talking heads tasked with pantomiming obedience, was actually waiting for Fauci’s sign-off for permission to enjoy Thanksgiving, Christmas, or Halloween with their families? Surely Americans, known for their independent streak, are more than capable of deciding who they’re going to spend their holidays with?

After 18 months mired in a perverse game of ‘Simon says’ with health authorities, though, it’s not clear at all that Americans remain capable of making their own decisions. The complex behavioral codes of stand-up-mask-up to sit-down-mask-off (except between bites) – and don’t forget to show your vaccination papers at the door! – that now govern public behavior in places such as New York City have highlighted the superstar rule-obeyers, while the independent-minded who were once admired are now ignored and slandered. Only in the world of advertising is it still OK to “Think different” – for the rest of us, there’s a mask for that.

Even as the nation has begun to lose faith in Pope Fauci, virus wrangler (and alleged perjurer) extraordinaire, the spot where he until recently sat in the collective unconscious, doling out contradictory advice about masks and herd immunity, remains vacant for many. Nature abhors a vacuum, and a year-and-a-half of focused training in learned helplessness is hard to shake off.

But that Big Brother-shaped hole in the modern American mind isn’t exactly new – it has its parallels in Dark Ages-era religious terror, the fear-driven domain of illiterate peasants forced to rely on a priest class tasked with holding all the knowledge the people can’t be trusted to read themselves.

The white-coated doctor stands in for the elaborately garbed cleric, prescribing the word of a Pharmaceutical God to those desperately seeking guidance but unable to read the ‘scriptures.’ Those holy books have since been replaced by scientific studies, which, as Forbes magazine reminds us, are hopelessly beyond our ken. Indeed, forget doing your own research, because attempting to read such texts at all “could lead to immeasurable, unnecessary suffering.”

Luckily for those who’ve become addicted to obedience, a seemingly endless series of Covid-19 booster shots appears to be stretching out ahead of them, which they may receive gracefully every few months in the same way more traditional religious practitioners might take communion. But abdicating responsibility for the contents of their veins to the Higher Power for whom Pope Fauci speaks is not enough to keep the rule-obeyers’ neuroses soothed. One can hardly take a vaccine every day, and not everyone has the conviction to post increasingly unhinged video auditions for the insane asylum, haranguing the unvaccinated for being “afraid” of the shot or demanding they be locked in their homes as daily proof of faith. Indeed, such displays make obedience itself look less than palatable, and just as faith in Fauci is flagging, so is support for his media henchmen and their increasingly unseemly demands for the genocide of the unvaxed.

The only cure? More rules to obey, of course. The combination of virus fatigue and the rise of ‘snitch culture’ have translated to a bonanza for scammers and scumbags of all stripes – not just those who work for the government. The Internal Revenue Service has vowed to paw through any and all transactions above $600 in value (luckily, most Americans can’t even pull together that sum for an emergency). Even banks call this new rule a “privacy breach waiting to happen,” citing frequent cyberattacks against the bureau.

And if there’s anything left after the taxman and the hackers have had their way with your bank account, it’s been a banner year for phone scammers, as lonely and listless Americans are apparently willing to offer up their credit card and social security numbers to anyone who calls them up with a half-coherent scheme.

One popular tactic is the “grandparent” scam, in which the scammer calls up their elderly victim pretending to be that person’s grandchild in trouble with the law and in need of some quick cash. Thanks to Covid-sponsored isolation of the elderly, Grandma or Grandpa probably hasn’t seen their relative in some time, making it easier for these rip-off artists to ply their trade.

For those who prefer to spend their rule-obeying time online, Facebook is building out a permanent prison state – er, virtual playground – called the Metaverse, in which all dissident thought will be exiled on pain of deplatforming. Never more will you have to unplug and face a frightening reality governed only by the laws of physics (and sometimes, not even those) – Facebook’s ever-growing list of forbidden thoughts will keep even the most rebellious minds in line, especially when the time comes to start implanting thought-interrupting technology into the brain itself.

Supposedly designed to disrupt depressive thought patterns, the latest and greatest in brain implants could eventually make rule-obeyers of us all, particularly those so desperate to become true believers that they’d gladly drown that little voice of critical thinking underneath all the propaganda they’ve imbibed.

And if the ruling class can convince us to embrace the injection of questionable compounds into our bloodstreams, they’re hardly going to be deterred by a little bit of bone and skin separating them from the hunk of grey matter that’s the real prize for those bent on thought control.

Is it possible to restore a sense of independence to a population that has voluntarily given theirs up out of fear of a virus with a 99%-plus survival rate, elevated an ill-tempered publicity hound to messiah status, and attempted to strip any and all of those who object of their professional credentials?

Only time will tell, but meanwhile, if you find yourself waiting obediently for the man in the white coat to give you the green light to continue living your life, you might be a member of a doomsday cult.