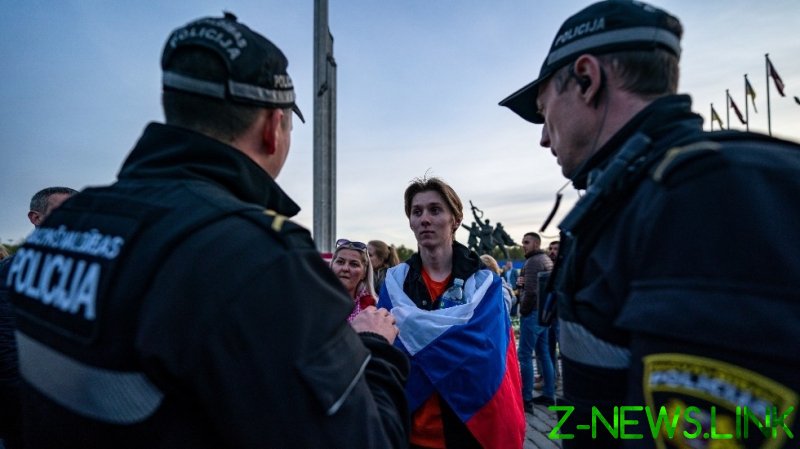 The mother of a young Latvian man, who is facing charges for brandishing a Russian flag during World War Two Victory Day celebrations in the EU country’s capital, has insisted that his arrest was groundless.

Alexander Stefanov was detained by police on May 10 near a monument commemorating Soviet soldiers in Riga. He had a Russian national flag with him, and was charged with justifying genocide, crimes against humanity, crimes against peace and war crimes.

The Latvian authorities said that this year, instead of celebrating Victory Day, the country would mourn those who died or were wounded in Russia’s ongoing military operation in Ukraine. They banned the display of any Russian or Soviet symbols, warning that it would be considered glorification of “aggression,” and could lead to criminal and administrative liability.

Alexander’s mother Svetlana Stefanova told RT that her son could face up to five years in prison if convicted, but a lighter punishment like probation or a fine was also possible. 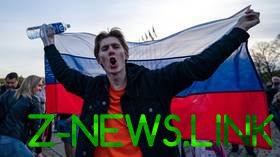 Her son’s treatment by the Latvian police was totally unexpected, the woman said, especially considering that, according to her, Alexander did nothing wrong.

The young man had engaged with police about the display of Russian symbols during Victory Day celebrations on Monday, with officers telling him that they were only banned on May 8 and May 9, she said.

Alexander returned to the memorial on Tuesday, May 10, together with many other people, who were shocked and angered after learning that thousands of flowers they had laid at the foot of the monument a day before had been removed by a bulldozer.

This time, he was bearing a Russian flag, confident that he wasn’t violating any rules, but was still approached by officers.

“They had a long communication, but the police eventually apologized to him and let him go,” Svetlana recalled. Alexander was able to lay flowers at the monument to the Soviet troops who liberated Riga from the Nazis, but “an hour later when he was leaving the square, he was arrested,” she added.

“What kind of liability can there be” when displaying the Russian flag wasn’t apparently illegal on May 10, the woman wondered. 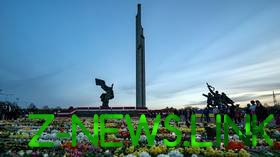 She said her home had been searched as part of the case against her son, and officers seized a hard drive and a SIM card.

Svetlana declined to discuss persecution of the Russian-speaking minority, which accounts for around a quarter of Latvia’s population. “I’m not a political person,” she said, adding that she could only think about rescuing her son.

Latvia was part of the USSR from 1940 and gained its independence in 1991 with the collapse of the Soviet Union. The country’s current authorities consider this to have been a period of “Russian occupation.”

Meanwhile, the Soviet monument in Riga is under threat of demolition after Latvian lawmakers voted on Thursday to renounce part of a treaty with Russia, in which the country committed to protecting and maintaining war memorials.