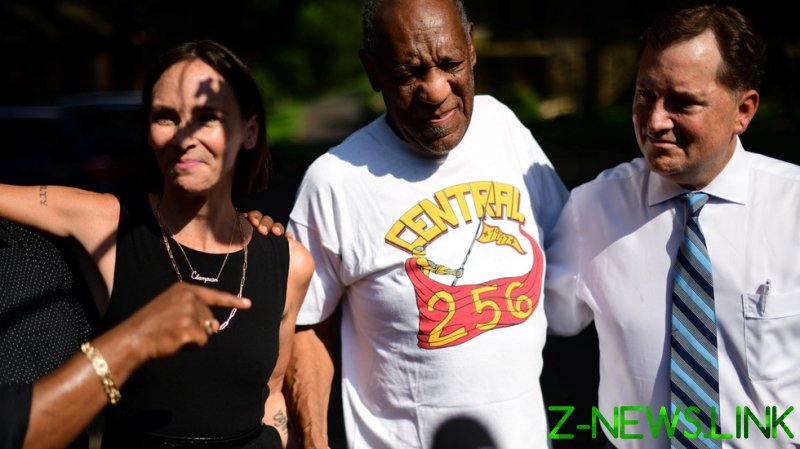 Appearing on Marc Lamont Hill’s ‘Black News Tonight’, Brown claimed that he and numerous other lawyers and judges were “not shocked” by Cosby’s release. The fact that Cosby’s case went to trial at all, the judge added, was a “travesty.”

Cosby had been convicted of sexually assaulting Andrea Constand in 2018 and spent more than two years behind bars before having his conviction overturned. Cosby’s successful appeal was due to a previous agreement with a prosecutor to give a deposition in a civil suit on the condition that he would not be charged in the case of Constand in the future. Cosby has denied any wrongdoing.

While Hill agreed Cosby had standing in his appeal, he posed the “non-legal” question of whether Cosby was still guilty, considering the numerous public accusers who made similar claims of being drugged and sexually assaulted by the comedian.

“He didn’t do anything!” Brown said multiple times, adding that the presumption of innocence is “absolute.”

The conversation took a turn when Hill brought up Cosby’s infamous deposition in the 2005 civil suit, which was brought by Constand. In the deposition, Cosby admitted to getting prescription Quaaludes with the intention of giving them to women for sex.

The release of the testy exchange with lawyers bruised Cosby’s family-friendly celebrity image, but Brown – who hosted his courtroom series for 15 seasons – pointed his finger at Cosby’s accusers and left Hill stunned.

“What about these women being accountable for their own behavior? They were groupies … sex, drugs, rock and roll,” he said.

He added people have forgotten what the term “groupie” means.

“The bimbos come to the party, they hang out, they get drunk, they snort lines of blow, and they have a good time,” he said, going on to describe sexual acts that would be carried out at “the party.”

Hill argued sex cannot be “consensual” if one party is high on drugs or inebriated, to which Brown replied, “that’s only the law in certain states.”

After talking over each other, Brown then confusingly described “rape by seduction,” arguing that treating a woman to a “good meal” could be considered “felony rape.”

He then tried to steer the conversation back to Cosby, shocking his host again when he said the comedian never “admitted” he did anything illegal.

“He never admitted to what … he was accused of,” Brown said, later adding, “All he did was [say], ‘They asked for it. I supplied it. They wanted it.’”

Hill blasted his guest as “disgusting” and called the interview the “most disturbing” he’d ever gone through in his life.

Hill and Brown continued to spar on Twitter into the weekend, where Brown’s comments shocked and disturbed many.

There were a few fans of Brown’s fiery appearance, including Bill Cosby himself.

“Judge Joe Brown ripped the skin off of Marc Lamont Hill on his own TV show… OH BOY that must’ve really hurt!” the newly free comedian wrote on Instagram, thanking the judge.

A spokesperson for Cosby, 83, suggested to reporters this week that the ‘Cosby Show’ star could be getting back into standup comedy, despite the numerous accusations of sexual assault against him.