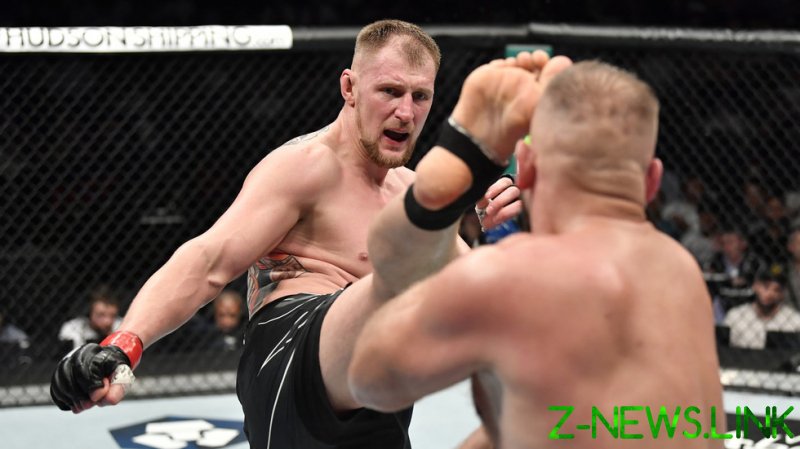 Alexander Volkov says that he is well aware that he is playing the villain ahead of the UFC’s first fight card in London in three years, and he says he fully intends to send what will be a hostile crowd in London’s O2 Arena home disappointed on Saturday night.

43-fight veteran Volkov is perhaps the UFC heavyweight division’s most battle-tested fighter, having taken on all comers throughout a career which has seen him throw down with some of the sport’s most iconic names.

Still just 33, Volkov has designs on establishing himself as a serious contender for UFC gold – particularly given the recent news that an interim title will likely be created following the prolonged layoff that champion Francis Ngannou is expected to face after his recent knee surgery.

But if Volkov is to state him claim at the top of the heavyweight division, the first step in doing so comes late on Saturday night in London when he takes on England’s Tom Aspinall – a fighter who has yet to see a third round in the UFC, and who has defeated three of his four opponents within the first half of the first round.

But speaking to the media ahead of the UFC London main event bout, Volkov says that he certainly isn’t overlooking his relatively inexperienced opponent.

“We all started on different levels and I have only respect for Tom,” said Volkov, who had 27 professional fights on his resume by the time Aspinall made his pro debut.

“There is no feeling that I’m better than him and I don’t look down on him at all; he’s a great guy.

“I watched his fights, and I think he has a great future in the UFC, and I’m happy to welcome him to the top.”

But despite Volkov’s diplomacy, he is aware to not expect such a considered reaction from the fans packed into the London arena for the UFC’s first event there since 2019.

“I’m ready for that because after all, our sport is also a show, and in good shows, there are always heels and faces,” he said, borrowing some terms from professional wrestling.

“Sometimes I’m playing face, but Saturday, I’ll be a heel. It’s all to entertain the crowd, and if they’re happy, I’m happy.”

Given his age, though, Volkov is likely aware that he cannot cede an inch of ground to Aspinall, either in the cage or in the rankings. Fighting is a ‘what have you done for me lately’ kind of sport, but as far as he is concerned those extra miles under his belt will translate to an experience advantage in the Octagon.

“I’m not that old,” Volkov said, comparing himself to his 28-year-old foe.

“I have an advantage in experience, but calling him a younger fighter – our age difference is not that bad. We’re both young, I just have more experience, and I think that’s my advantage – my experience and my way of fighting.”

We will learn late Saturday evening if Volkov’s experience can overcome both his opponent and the hostile crowd what will be a pivotal bout for both men.