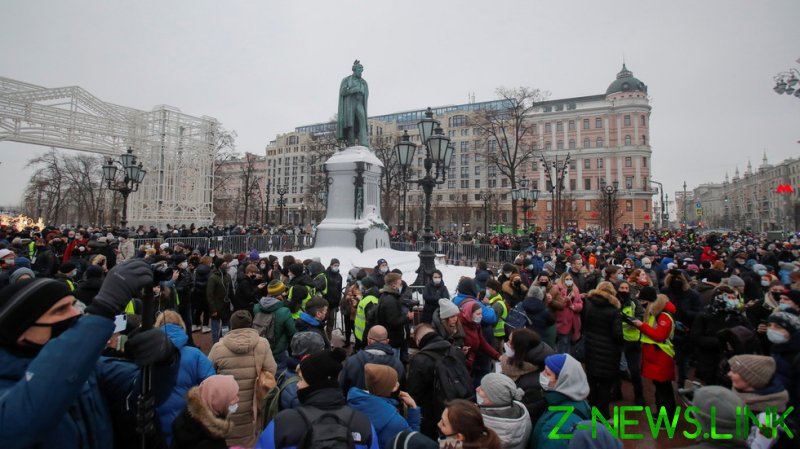 Hundreds of people have gathered to rally in Moscow’s Pushkin Square, in defiance of warnings that the demonstration was not authorized and would be dispersed. Police officers have started to detain participants, placing them in buses on Tverskaya Street, a major central thoroughfare. Reports suggest around 40 have already been taken into custody, and that figure can be expected to rise substantially.

Navalny’s team has a long record of staging unsanctioned assemblies, claiming that Russian rules regulating public events are too restrictive to opposition movements. However, in this case, authorities also pointed out that mass gatherings are prohibited under regulations designed to control the Covid-19 pandemic.

Law enforcement has been using megaphones to instruct people to maintain social distancing and keep their masks on, rules  disregarded by many of those who have flocked to Pushkin Square. The crowd has occasionally chanted common opposition slogans as officers in riot gear maintain a noticeable presence in the centre of the capital.

Attendance at the protest was difficult to estimate, with people coming and going. Police reported that around 4,000 people took part about 40 minutes after the scheduled start of the rally. However, people started gathering at the site hours in advance.

Earlier in the day, similar protest events were organized in other Russian cities, including Khabarovsk, Vladivostok and Krasnoyarsk, large cities in Siberia and the Far East. Dozens of activists were reportedly detained by local law enforcement. Crowds were relatively low, with the largest, around 4,500, reported in Novosibirsk, a city of 1.6 million, and Siberia’s largest.

In the days leading up to the march, Russian officials sought to remove online calls for people to join the rally, directed mostly at underage audiences. The Russian telecommunications regulator said it found that some social media platforms were spreading such messages and demanded that administrators take measures to stop them. The office of the prosecutor general warned that sites disseminating the appeals were helping to draw minors into an unlawful act and could be held liable.

Navalny is currently being held in pre-trial detention. He was detained just after arriving in Moscow from Berlin last week after spending months in Germany. During his time outside Russia, which was the result of an alleged poisoning last summer, he had technically violated the terms of his parole from a 2014 embezzlement case. As a result, the Russian prisons authority petitioned a court to replace his suspended term with a real one.

The case is hardly clear cut, since Navalny left the country due to a medical emergency. In August he fell seriously ill after what he believes to be an attempt on his life by agents of the Russian security service FSB. The poisoning claim was supported by Germany and many other Western countries, who demanded Navalny’s unconditional release after his latest arrest in Russia.

The Kremlin has denied that an assassination attempt ever happened and instead claims Navalny is working with foreign intelligence agencies in a bid to smear Russia. The government said it will ignore Navalny’s foreign supporters, saying they were meddling in Russia’s domestic affairs.