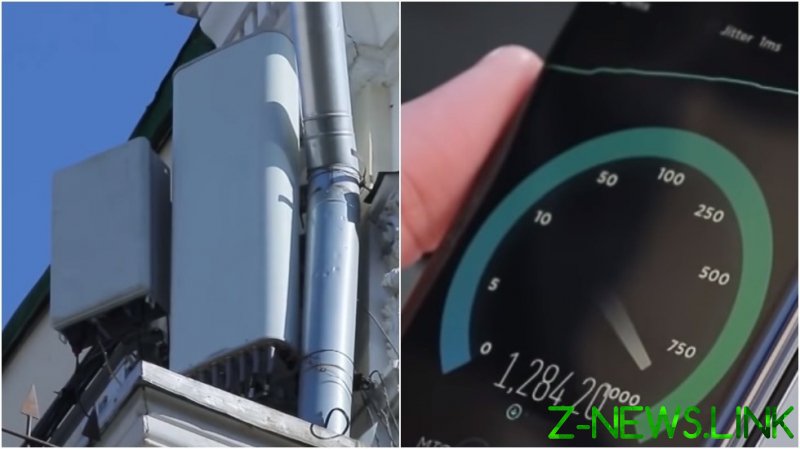 5G being available to the public is a “breakthrough” because “it is the only way we can make sure mobile networks keep developing,” Victor Belov, president for technology at Russian telecom giant MTS, which is behind the pilot project, told RT.

The new standard will allow mobile phone users to “watch videos in Ultra HD and even some newer formats.” The people “won’t have any trouble doing a live-stream from a packed venue during a concert, even if everyone around is doing that too,” he said.

A truly autonomous transport system, which includes self-driving cars and delivery drones, will also only be able to function property when 5G is widespread, Belov added.

RT’s Ilya Petrenko tested the network at Nikolskaya Street near the Kremlin, which became well-known around the globe after being chosen as the No.1 gathering spot by football fans during the 2018 World Cup in Russia. The connection speed stood at almost 1,300 megabits per second, allowing him to download a two-gigabyte file onto his phone in an “impressive” 35 seconds.

When the introduction of the technology began internationally in 2019, it brought about numerous conspiracy theories alleging that it was harmful to human health. Some people, and even a handful of internet celebrities, went so far as to blame the tech for the outbreak and spread of Covid-19.

But the MTS representative brushed off those concerns, pointing to numerous studies that have proved the safety of the next-gen tech. And Muscovites mostly seem to agree with the scientists, with one girl telling RT that the conspiracy theories were just “nonsense.”

Other locals also didn’t mind having 5G transmitters set up above their heads, calling the new network standard a huge step forward for the whole IT sector. However, there was one woman who insisted that the health effects of the technology need to be studied further.

People also shouldn’t be concerned when more and more 5G masts pop up around them, Belov explained, adding that some think “it’s more dangerous… but the actual fact is the more transmitters there are – the lower the level of electromagnetic radiation each one of them emits.”

So far, the Russian capital has 5G transmitters erected in 14 locations, including the area around the Bolshoi Theatre, the Gorky Park, the observation deck at Sparrow Hills, and Zaryadye Park.