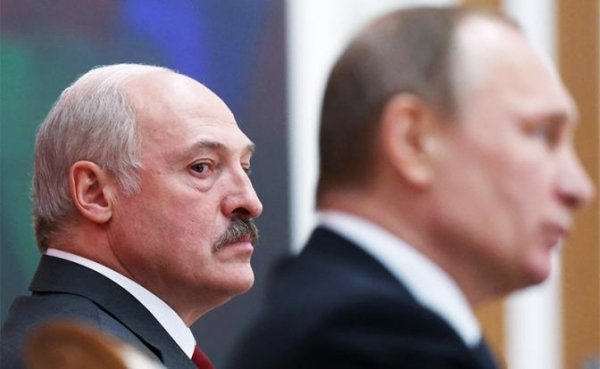 The end of 2019 and the first days of the new year was marked by a resounding crash and the simultaneous economic, political and military foundations of the so-called Union state. Long touted as the brotherly relations between Minsk and Moscow on the eyes take on the character of indecent communal quarrels in the worst sense of this expression. And it has long been impossible to understand who started this new fight: Belarus or Russia? One thing is certain — in a decent society to behave is not accepted anywhere.

In the December interview with radio station “Echo of Moscow” President of Belarus Alexander Lukashenko stated the events briefly but exhaustively for sure: “We are starting a canine. So this is my life today.” Take only fresh reports from this recent front.

From the very first day of the new year, 1 January, suddenly many suddenly dried up the Russian tubes in which hydrocarbon feedstock since the Soviet Union was delivered to the Belarusian oil refineries Naftan and Mozyr. An anonymous representative of one of these factories told reporters: “We are working with reduced loading on the remains of materials that had been accumulated in December. Contracts for the supply of oil is still not concluded, delivery is missing on 1 January.”

According to the statement of our “Transneft”, yet is entirely carried out by pumping oil to Europe via the Russian oil pipeline “Druzhba”. But for how long? In fact the other day in the interview to “echo of Moscow” obstinate “old Man” said very clearly: if we fail to properly negotiate with Moscow on oil for its alternative supply of the reverse to the two Belarusian oil refineries will be busy for two of the three pipes of the oil pipeline “Friendship” which while driving their hydrocarbons to Europe, Russia.

Terrible a warning sounded extremely arrogant and outrageous authoritarian: “Russia supplies about 70 million tons through these tubes into the premium Western market. If I pull two tubes, it will remain around 20 million tonnes. I ask the question: why do you need me to drive the solution of the question in this way? I don’t want to.”

Thus, barely having time to remove the threat of catastrophic reduction of Russian gas supplies through Ukraine, the Europeans are in the midst of winter can face new and even more formidable economic trouble. Now to them at the direction of the biting at the bit “Farther” can immediately and very significantly reduced the flow of oil through Belarus. And that is typical: under the incessant arguments about exclusively fraternal relations between the two Nations have long decided to become allies. In light of what is happening, it’s tempting to say — sworn allies.

What is actually happening? And that’s what. It seems that Vladimir Putin was tired of pretending that formally created in April 1997, the Federal government really exists and even if develops. December 19, 2019, the President of the Russian Federation stated that the idea of unification of Russia and Belarus was correct, but 90 percent solutions for its embodiment in life remained unfulfilled.

It is easy to guess that it meant that day Putin. Recall: a Union contract signed by Moscow and Minsk, provides for the establishment of a single Parliament, a single Council of Ministers, one court, the accounts chamber of the single currency and a single emission center. Where is all this? Even talking is long gone. Except for Moscow and Minsk kitchens.

Over the past almost quarter of a century, the case came down, mostly, to the pleasant and unilateral economic preferences of our neighbors from Russia. Which, of course, in Minsk long been accustomed to. For example, the annual “perenoske the” 6 million tons of Russian oil brought to the Belarusian budget hundreds of millions of dollars. To discounted prices for fuel consumed in the Belarus. To relatively cheap oil, obtained from Moscow, and then refined into gasoline at local refineries and sold to the West at world prices.

See also:  Regardie reduced two times the amount of the claims to the Bulk of the protests

Naturally, all of this “old Man” wants to save a little longer. A joint political transformation, without which no Union state is impossible in principle, to quietly sweep a broom somewhere in the darkest corner of the negotiating room.

Absolutely clear and what you are most afraid of Lukashenko. The single currency is the Russian ruble and nothing more. No one in Moscow will not be for one only of Belarus, the economy which is about 30 times less than ours, to invent non-existent until the “Bratskoye” means of payment. All emission rights in this case, it will only do CBR. The economic takeover of a neighboring country, thus, be a matter of a few years.

Very cynical and very frankly formed to 2020 point of view of the Russian leadership on the prospects of the Union state was formulated by the leader of LDPR Vladimir Zhirinovsky: “They (the Minsk “JV”) want gas at a price of Smolensk. Then become as Smolensk. But not one small area and six regions. This can be Federal district — the Western Federal district”.

But such a transformation of Belarus “in the Smolensk” — neminuchaya political death and the “Father”, and formed around him in Minsk elite. It is clear that against such prospects is going to fight to the last drop not of his blood.

Yet the harsh reality for our allies as it is. In 2020-2021 years, Russia demands from Minsk for gas at 152 dollars for each thousand cubic meters. But in 2019 it was only $ 127! That is, for everyone else in Europe the price of gas falls. And only for our allies is growing.

The explanation of this oddity on 30 and 31 December, Lukashenko tried twice to Putin in the course of tense telephone negotiations. As further events — to no avail. The time has come to strike back in Minsk according to the interests of Moscow.

Most likely from the expropriation of Belarus, the Russian pipeline “Friendship” it still will not come. Because standing in the political position of Lukashenko serious complications with the West now more than anything. But his Ministers, the President ordered to consider the scheme of delivery of oil on the dying Belarusian refineries by rail tank cars from the Baltic ports. Perhaps it will cost even more than paying Moscow requested for 2020 money. But in war as in war!

Next. 31 December, as soon as the telephone calls Lukashenko and Putin failed, the Ministry of defence of Belarus appealed to their Russian colleagues with a statement of “no interest to provide Russia with military bases on the territory of the country.” According to the press service of the Belarusian defense Ministry, in 2020 Russia will have “interest” in Minsk for the extension of deployment of Russian military facilities.

Well, about the Russian military bases from the evil one. There is no such in the territory of our neighbors. And never has been.

Long, made in 2015, the Russian defense Minister Sergei Shoigu, the proposal to establish in Belarus a base for our fighter aircraft for a long time with ill-concealed contempt Minsk rejected at all levels. And nothing else in the country and no. Because the Russian 43rd zonal communication hub of the Russian Navy in 7 kilometers from the town of Vileika in Minsk region and 474-th separate radio node (in other words, the UHF radar “Volga” our system of missile warning), 48 kilometers Southeast of the city of Baranovichi of the Brest region the status of military bases never had. Just plenty of technical military facilities of the Russian Armed forces. Only.

Yes, by mutual agreement Moscow all the years for them not a penny paid to Minsk. Because Belarus gave them to us for free use for 25 years without pay for the channels and “without levying all types of taxes, except for taxes related to economic activity.”

Recently Lukashenko unveiled prepared in the bowels of his office a certificate stating how much the country has lost from this decision. It turned out, only from 2011 to 2019 of $ 120 million. Although the fact of such estimates is questionable. First, any bilateral negotiations on this subject has not been spent. Therefore, the obscure and the original rental price per square meter of the territory of Belarus.

Secondly, if we move to such a quarrelsome arithmetic, why Minsk did not remember that in exchange for the rent-free arrangement, Russia wrote off Belarusian side $ 900 million debt for energy? And yet — pledged on a Pro Bono basis of its military training areas for firing drills and information on missile and space environment?

However, what really is now?.. Although any money for these objects Lukashenko still does not Shine. First of all, because of the radar “Volga”, which is from the Baranovichi monitors patrolling areas of nuclear submarines NATO in the North Atlantic and in the Norwegian sea, recently not so we need. We have prepared for such move politically windy “Father”. And in 2014 under the town of Pionersky in the Kaliningrad region for 4.4 billion rubles built much better nadvoreshni radar “Voronezh” with a range of “vision” in 6000 miles. Sector review completely overlaps that of the aging of the “Volga”. Therefore, the “Volga” it is easier to close than to start paying for its work in Minsk.

With a communication of the Navy under Filename more difficult. There on the area of 650 hectares in 1964 sverdlikova acts of the Russian radio station “Antey” with a transmitter power of 1 thousand kW. It provides the link of the Main staff of the Navy with warships and nuclear submarines on duty in the Atlantic, Indian and Pacific oceans in part on a distance of more than 10 thousand kilometers. Another like from us, as far as we know, not yet.

Then it turns out that Russia, the allies can make to continue to pay only for the work of “Anthea”. But in this case it probably won’t be about real dollars, but the banal netting (or on military-technical “barter”). The Belarusian leadership after a long time asks Moscow latest BTR-82A and 122-mm mortar systems “Nona-M1”.

And since autumn last year Russia began to implement a contact for the supply of Belarusians 12 multi-role fighters su-30CM. The first four cars already in the hands of new owners. Now they will need spare parts, servicing, maintenance, expensive sets of arms. That’s all it can apparently offer in exchange for the continuation of the work of the Russian communication node under Filename.

But what would it not ended the quarrel between Moscow and Minsk since the first days of the new year already brewed serious. It would be strange if this fact is not immediately used by our detractors. So they are already on the way.

As announced in Minsk, 4 January 2020 in the capital of Belarus on a visit, was going to arrive the United States Secretary of state mark Pompeo. Yes, the visit was postponed due to sharp aggravation of the situation around Iran and Iraq. But only postponed, not cancelled. Therefore, in a gaping hole in the Board of the Union state already flooded our common enemies.

January 4, Belarusian concern “Belneftekhim” reported on the conclusion of the first year of the current contract for the supply of hydrocarbons from Russia without a premium price. According to the group, the amount expected for delivery of raw material will provide for continued operation of the Belarusian oil refineries. But so far, only in January 2020.

Therefore in inflaming the conflict between the allies, it could be only a temporary respite and not at least on a truce.