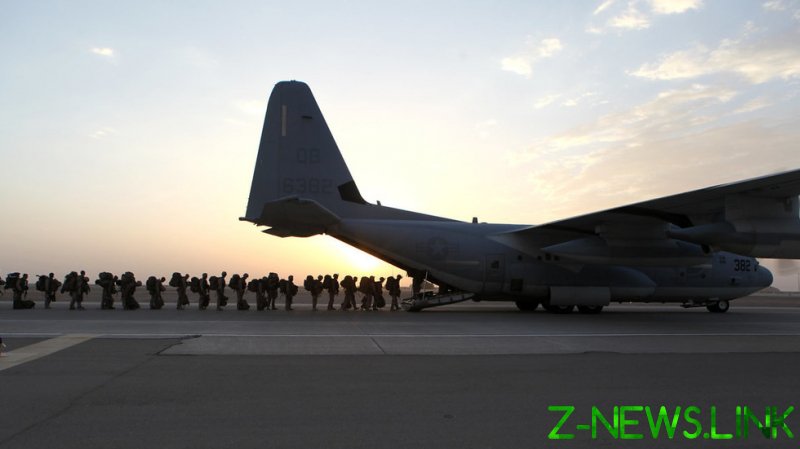 The US military was “actively monitoring the situation” on the ground, Major General Hank Taylor – operations director at the Joint Staff – told reporters at the Pentagon on Monday afternoon. After the Hamid Karzai International Airport (HKAI) was closed for inbound and outbound flights earlier in the day, it had reopened for operations as of 3:30 pm in Washington (midnight in Kabul), Taylor added.

The C-17 cargo planes with US Marines and 82nd Airborne elements were arriving, bringing the total number of US troops there to around 3,500.

Their mission, Taylor said, was to evacuate US citizens, diplomats previously evacuated from the embassy in Kabul, the Special Immigrant Visa (SIV) recipients and Afghans considered at risk. He did not say if any of the outbound flights had taken off, however.

“Our focus right now is to maintain security at HKIA,” Taylor said, adding that the US troops are prepared to respond if attacked.

The US withdrawal from Afghanistan was supposed to be completed by August 31, but the Taliban is now in control of almost the entire country, including the area immediately surrounding the Kabul airport. There were conflicting reports on Monday that Taliban fighters were inside the airport itself, but the Pentagon officials seemed either oblivious or unconcerned.

Garry Reid, formerly the Pentagon director of defense intelligence and now in charge of the Afghanistan Crisis Action Group – a task force set up in July to organize the transport of diplomats, Afghan staff and refugees – spoke with reporters as if everything was going great.

“Our US military has done an outstanding job supporting this effort,” he said, referring to the SIV evacuation to Virginia, and new sites in Texas and Wisconsin. More than 700 Afghans had been evacuated over the past 48 hours, Reid and Taylor said, making for a total of 2,000 since the effort began. The US has prepared capacity for 22,000, which can be expanded if needed.

A photo that started making rounds on Sunday evening showed hundreds of Afghans – some women and children, but mostly men – crammed into the cargo hold of a C-17 outbound from Kabul. Though the initial chatter from the crew suggested as many as 800 on board, the final number was actually 640, Defense One reported on Monday.

The crew of the Globemaster cargo plane, call sign Reach 871, “made the decision to go” after hundreds of Afghans climbed up the half-open ramp, instead of trying to force them off.

Chief Pentagon spokesman John Kirby denied the situation in Kabul was a failure and argued that while the US military had plans for evacuations as far back as May and a tabletop exercise two weeks ago, planning is “not a perfect process.” While the Pentagon planned for the possibility of Taliban making “significant gains,” it “did not anticipate” the US-backed Afghan military capitulating without a fight, Kirby added.

Videos of Afghan men mobbing the planes taking off – clinging onto the landing gear and some falling off to their deaths – made the rounds on social networks on Monday morning. HKAI was shut down at some point earlier in the day, “out of abundance of caution,” until US troops could restore order, Kirby had said earlier.

US President Joe Biden briefly returned to Washington from his vacation in Camp David, but did not address the calamitous withdrawal in his remarks to the press. Instead, he defended the decision to withdraw and blamed the Afghan government for lacking the will to resist the Taliban.