More than a thousand workers in Vladivostok staged a spontaneous strike 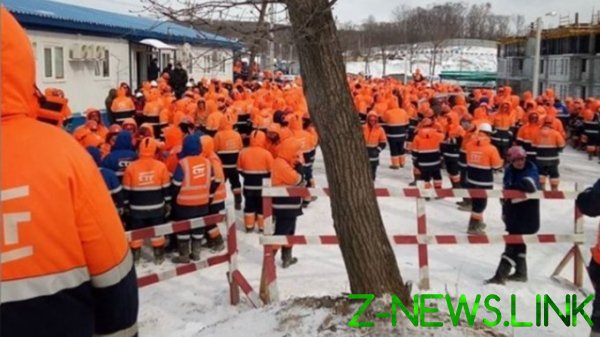 About two thousand workers in the construction of the theater-Museum complex on the island of Russian in Vladivostok went on strike. It is reported Siberia.Realities with reference to one of the shift workers. The protest began spontaneously after the workers were paid 3-5 times less than promised, said the strikers.

According to the protesters, the February salary they “suddenly cut more than in half.” “In January paid at 110-130 thousand, in February – not more than 60, and someone 20-25 thousand”, – reported shift workers, adding that the company’s management, despite promises, does not return them the money spent on the road. The strikers threaten to block the road if they did not pay all of the promised work.

According to some workers, they are also dissatisfied with not only the lack of money, but unsanitary conditions in which they live and work, and poor diets.

To the place of the strike left the representatives of the regional authorities. The Prosecutor’s office of Primorye said that began the test, and also reported that had not previously received from the workers complaints of non-payment of money.The construction of Museum and theater complex on the island of Russian has been the company “Stroytransgaz-East”. The company’s management has promised to go with the workers to negotiate. The company said that some of the claims of the builders are justified, but will not solve the problem so quickly.

In the office of audits began, said the Investigative Committee for the region. The documents seized, there is a survey of employees and management. The construction of the complex is completely stopped.