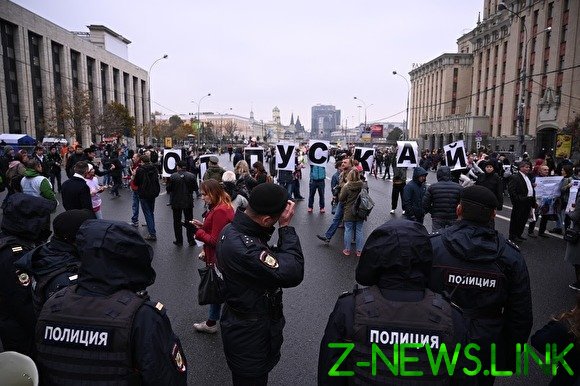 63% of Russian respondents said that in the country there are people who have been convicted for their political views or the desire to participate in political life, follows from the data of the survey “Levada-center”. As “Vedomosti”, it is the maximum for all time of research for the past six years. A year ago this was the opinion of 50% of the respondents.

According to the survey, a free man in society feel 68% of the respondents, about personal freedom of say 32%.

A sharp increase in the share of answers about availability of political prisoners was the effect of the case of journalist Ivan Golunova, a summer of protests and extensive discussion of all this in the media, the Director of “Levada-center” Lev Gudkov. “It is important that the arrest of the journalist responded to all the media community, so this case has received a wide resonance. Then sharply changed their attitude to the police and the court, people began to understand that there are no measures against those who opened a criminal case, will not be accepted that all law enforcement and judicial system works for the protection of the authorities. Indirect way this understanding has spread to the whole system of struggle against dissent and civil society,” — says Gudkov.

Asked to name names of specific prisoners, the majority of respondents remember in the first place of the businessman Mikhail Khodorkovsky and the Director Oleg Sentsov, says the sociologist. “Specific names according to the “Moscow case” they can not lead. The first thing to remember Khodorkovsky, for political prisoners also include in General those convicted in the “Moscow case” articles for extremism. People have the understanding that the system works hard on dissent, but the details they don’t know — there is an understanding only of the overall situation,” adds rings.

The survey “Levada-center” conducted from 12 to 18 December 2019, and was attended by 1.6 thousand respondents.