Home / WORLD / More than 3,000 patients a week, like poor old Captain Tom, are being infected with Covid while in hospital for other ailments

More than 3,000 patients a week, like poor old Captain Tom, are being infected with Covid while in hospital for other ailments 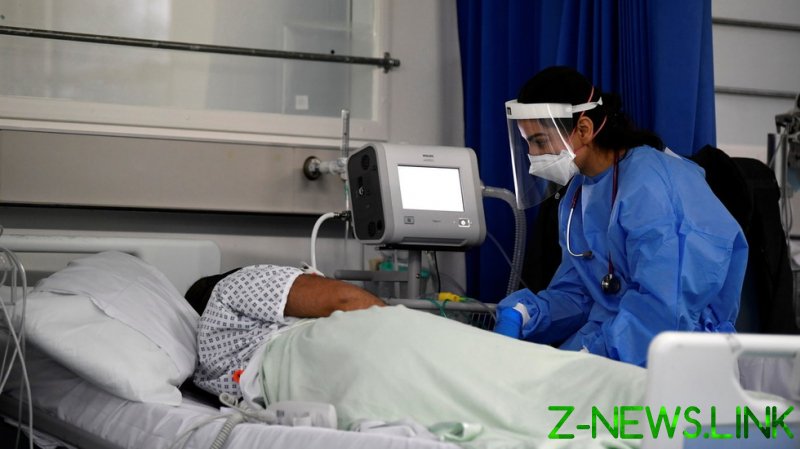 During January, it has been reported, more than 450 people were catching Covid-19 every day while in hospital in England for other medical reasons. Which means that, over the course of the month, nearly one in 10 people in hospital were infected. One in 10… 10 percent.

In case you think that figure seems unbelievable, it is pretty simple to work out. There are around 140,000 hospital beds in England. They are not all full, all the time, but at present, they very nearly are. If you infect 450 people a day, over the 31 days in January, this is 14,000, or just under 10 percent.

This 450 figure is also likely to be significantly underestimated. My own experience is that hospital managers are extremely keen to find any possible explanation for a positive test, other than that their patient caught it while in hospital. They must have got it at home, or in the ambulance, or in a care home, etc.

Even using the bare-minimum figures, this has to make hospitals by far the most dangerous places in the country, at least from the perspective of catching Covid-19. As we all recently discovered, Captain Sir Tom Moore developed pneumonia, was admitted to hospital, where he almost certainly caught the virus, and then died. Whether or not the 100-year-old NHS fundraiser died from Covid is an interesting question, but that is not the focus of this article.

Earlier reports have shown that, in some weeks, more than 20 percent of the new Covid cases are people infected in hospital. And the question has to be asked as to whether the number of infections in hospital is a disaster, an unforgivable error, or simply an inevitable consequence of having thousands of people crammed together in buildings full of ill people, many of whom are infected with Covid-19.

My own experience of working in the NHS during January would suggest there is not much you can do. I cover an NHS rehabilitation unit, which is remote from the local hospital. A hospital ward that sits all by itself, if you will.

It houses 30 patients, all in separate rooms. Currently, none of the patients is allowed to leave their room and the staff cannot enter any room without wearing full PPE. This has been rigidly reinforced, and an ‘inspector’ comes in from to time to time to ensure the rules are being followed.

At the start of January, none of the staff and none of the patients had the virus, and no patient could be admitted without being 14 days past a positive Covid-19 swab. We were also doing twice-weekly lateral-flow tests to ascertain if any staff member or patient had coronavirus antigens and could be spreading the virus but was asymptomatic. All that notwithstanding, later in the month, 15 patients and eight staff developed Covid-19.

And what have I learnt from this? I’ve learnt that whatever we’re doing, it’s not working. Because we’re not following the rules? Well, we are, we were. If we weren’t doing so to absolute perfection, we were certainly following them as well as any hospital unit outside of intensive care is going to.

Which leaves the worrying possibility that you really cannot do much to stop the spread. In order to do so, you would almost certainly need positive-pressure bio-suits, close-fitting masks with filters and respiratory cartridges, the full enchilada. Because, you know, viruses are really, really, difficult to stop.

Just to give you a couple of examples of this, going back in time. Many years ago, in 1978, the UK had the dubious distinction of having the last-ever person in the world to be infected with smallpox. It happened in a hospital in Birmingham.

The unfortunate lady’s name was Janet Parker, aged 40. She was a medical photographer, working in the hospital, which also contained a laboratory unit, studying smallpox. She had no direct contact with the lab or the virus. To quote from the report on what went wrong:

“There was no evidence to suggest that Mrs Parker had ever been in the pox virus laboratory suite, and there was no reason for her to have done so in the course of her work.”

So, how on earth had she become fatally infected? The report concluded the most likely route of contamination was via two ducts. The first was in the laboratory where the virus was being studied. It had a few small cracks in it, allowing the possible “small transfer” of the virus. The second duct led on from this and was situated in the animal lab. This duct then led to a telephone room that Mrs Parker was known to use. This, too, may have allowed a small transfer.

“There was an indication of a small and irregular transfer to the room on the floor above next door to the ‘telephone room’ via Duct B … there was some suggestion of a very small transfer to the subway via the bottom of the duct in the animal pox room, duct C.”

So, there were two possible points of contamination that were only marginally connected. They were found to allow “small and irregular transfer” of viral material. The viral material would then have had to travel a considerable distance through two ducts from the laboratory to a telephone room before infecting Mrs Parker. This was considered to be the only possible route, because no other source could be found. As those who wrote the report said:

“There are some experts who have worked with smallpox virus who would doubt whether airborne dissemination of the virus during laboratory work is a credible route for the transfer of infection, and it is true that we know of no proven case of airborne spread of smallpox from laboratory cultures. That such a route is possible for the natural disease was demonstrated (in 1970 in Meschede, West Germany), where a smallpox patient admitted to the ground floor of a hospital infected patients on the first and second floors despite having no direct or even indirect contact with them. The pattern of spread of the secondary cases point to airborne transmission of virus as the route by which they were infected, and this was confirmed by smoke tests.”

In this case, the virus left a window on the ground floor and travelled up two floors. It then blew back into the windows upstairs and infected patients, on both floors above. Which is a pretty dramatic example of exactly how infectious viruses are. Does six feet of distancing work? More likely 60.

And all this with a virus normally not even believed to spread through airborne transmission: “Smallpox spreads from contact with infected persons. Generally, direct and fairly prolonged face-to-face contact is required to spread smallpox from one person to another. Smallpox also can be spread through direct contact with infected bodily fluids or contaminated objects such as bedding or clothing.”

Yet airborne transfer, at extremely low levels of contamination, was all that was required to spread smallpox. A virus that was never thought to be transmitted this way. Knowing this, researchers have examined the spread of Covid-19 in ferrets.

To carry out this study, a ferret – it cannot be done, ethically, in humans – was first infected with Sars-CoV-2. It was then placed in a cage, connected to another one above it, containing a second ferret, via a duct with four 90-degree bends in to prevent all possible droplet spread. That’s what’s known as serpentine ductwork. In short, the only possible way the ferret above could be infected was via airborne spread.

In repeated experiments, every single ferret in the upper cage became infected via airborne transmission through the serpentine ductwork. The study’s premise was ‘SARS-CoV and SARS-CoV-2 are transmitted through the air between ferrets over more than one meter distance’.

The implications of this, and the earlier work done on smallpox transmission, is the following: gloves, plastic aprons and loose-fitting masks can have no significant effect on the transmission of the virus. It is in the air, in very small aerosols. It will be breathed in, or get into people’s eyes, or land on their skin, where they will touch it, and then touch their mouths.

Hospitals, containing a lot of people breathing out the virus, are where people will breathe it in and become infected. You cannot, in truth, stop it happening. Well, you could, but the level of protection required is far beyond any hospital setting or budget. The current figures demonstrating hospital transmission are not really a surprise. The only real surprise is that the rate of infection is not higher.